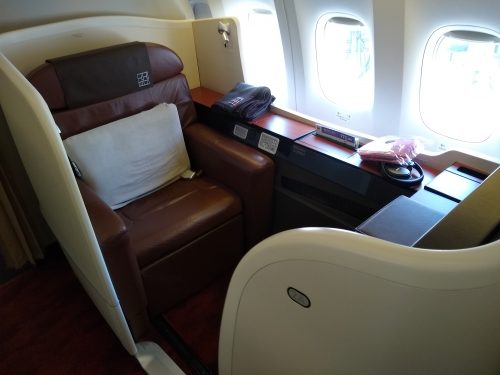 American AAdvantage Sweet Spots That Are Still With Us

I thought I’d covered all American sweet spots in my previous installment — well, I was wrong. As I was reading this Frequent Miler’s post about the new AA website functionality (you can now search JAL awards on the AA web site) it kind of hit me: wait a moment, AA does have a very decent redemption rate for premium classes to Asia 1 — Japan and Korea: 60,000 miles for Business and 80,000 miles for First Class. Be it on Japan Airlines or American’s own metal, this is actually a really good value in our grossly overpriced reality. United charges 70,000-80,000 miles for Business Class to Japan and 110,000 for First, while Delta … well, don’t get me started.

So let’s take a closer look, for when you have a low-cost award combined with zero availability, does the cost really matter?

But first, here are available routes between Japan and North America

I gave myself a tall order — to find premium class award flights to Japan during sakura blossom time, which are notoriously difficult to get on miles. In addition, to cut myself even less slack (and save some time in the process), I decided to check availability for 2 people. While no one can tell when the cherries will blossom next year, it historically starts in late March.

My very first search surprised me. I decided to start with Dallas, since both JAL and American fly there. What you see is JAL nonstop award flights for at least 2 people. It’s a little bit better for a single traveler, but not by a big margin. I clicked through every single date to make sure they are JAL flights, and every single flight to Japan I checked was on JAL with a positioning flight on American or Alaska. 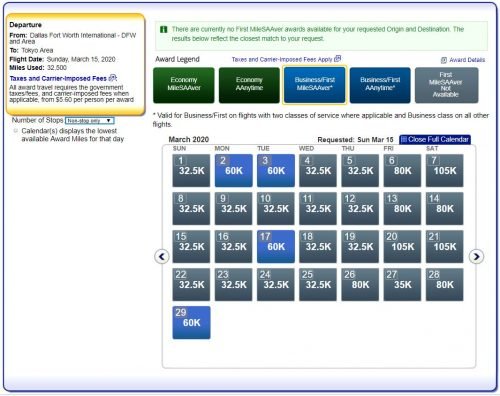 JAL Business Class nonstop availability from Dallas is not great, but you’re looking for 2 Business Class award seats during the cherry blossom season

And when I changed the Number of Stops from nonstop only to no preference, availability became much, much better. Remember, this is for 2 people! 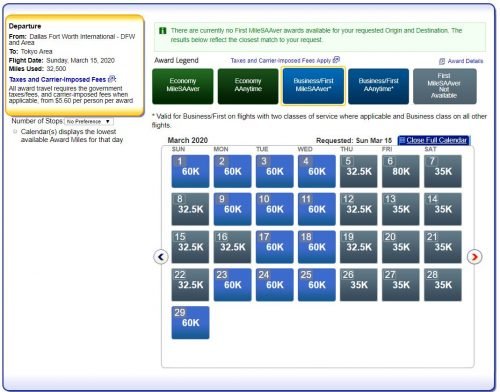 In this example you would connect via Seattle or Chicago. 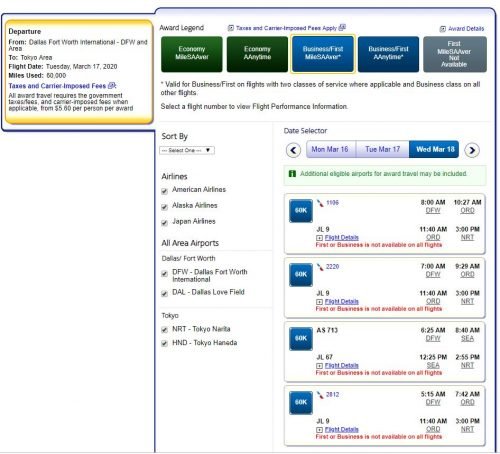 You can expect similar availability (at the time of writing) from other cities with a few First Class flights thrown in for good measure (but only for 1 passenger, unfortunately). 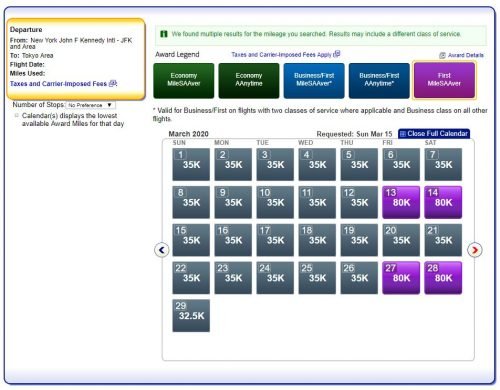 Some award space for JAL First Class too, but only for one person

What about award space from Japan to North America?

Unfortunately, for this time of the year, it’s not that good. Here is availability from Tokyo to Dallas for 2 passengers. It might be better for solo travelers, so check for yourself. 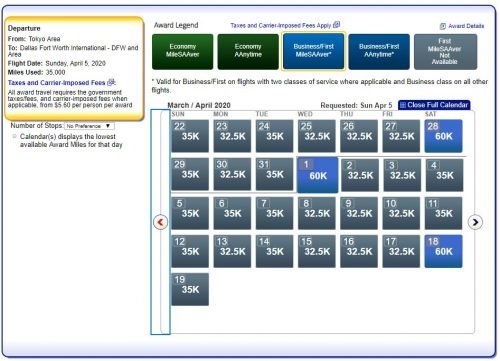 When is the best time to book JAL Business Class award?

In general, my little research has revealed the following trend. Availability from Japan is good to excellent August until December, peaks in winter (January through March), and dries out in April before returning in May. 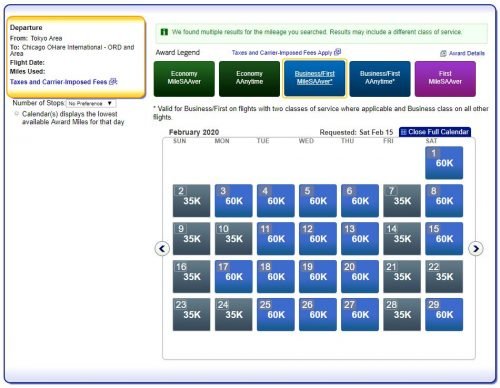 Award availability is truly excellent for better part of the year

And a few First Class cameos. 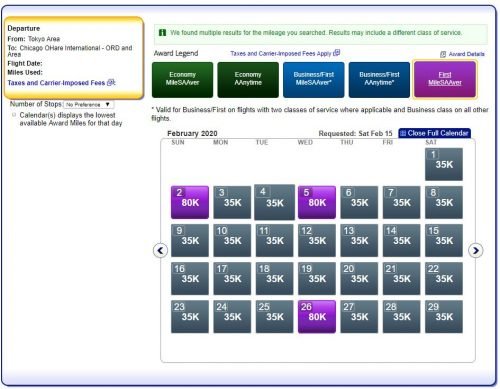 Of course, all these factoids will be totally useless if (when) American pulls JAL Business and First Class award space. What I mean is: don’t procrastinate! If you want to go to Japan in an excellent Business or First Class seat without selling your firstborn, book now.

Want to see something beautiful?

Here is nonstop Business Class availability for 2 people from Seattle to Tokyo (NRT) in August. If you “need” to be in Japan this August you’re in luck. 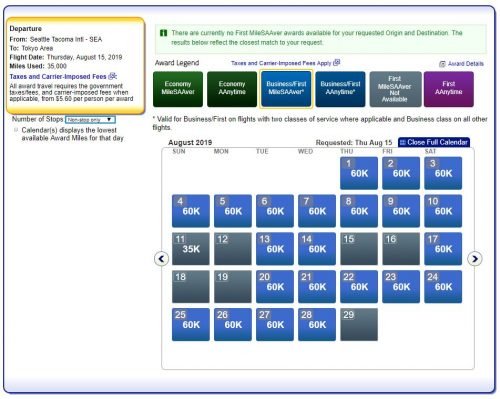 This is the same from Chicago. 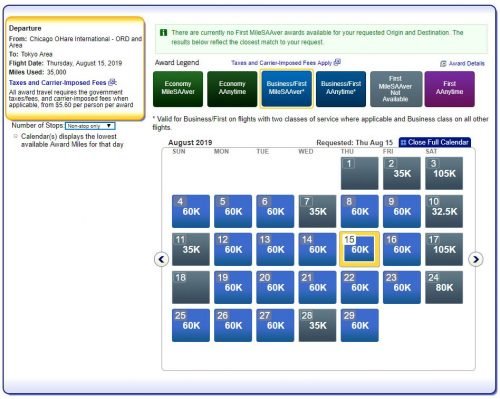 This wide-open availability means that you should be able to find your own lie-flat spot from practically anywhere in the country. The worst thing that can happen is — wait for it — you might have to “endure” a connecting flight. And yes, I checked. This is Minneapolis  to Tokyo, for example. 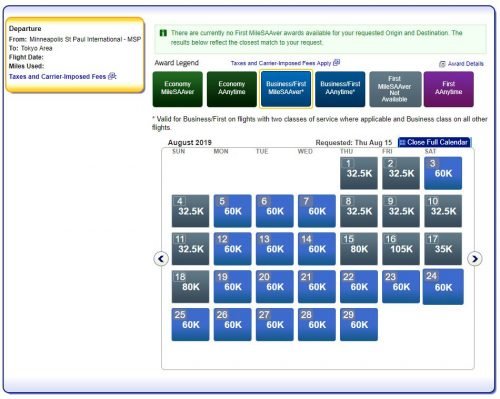 For traveling to Korea, you have to rely on American, because Japan Airlines doesn’t fly to Seoul. American does fly to Seoul from Dallas (DFW), which means that looking for a Business Class seat to Korea from Dallas is almost like looking for a unicorn. American simply doesn’t release nonstop awards in premium classes anymore due to its nearly universal marriage segments craze. You might get lucky every now and again, but that would be an exception. In any case, I haven’t been able to find such an exception till the end of the schedule.

Getting to Korea from other cities is not impossible because America is reluctantly willing to sell you an award ticket on its own metal, as long as it’s a connecting flight. 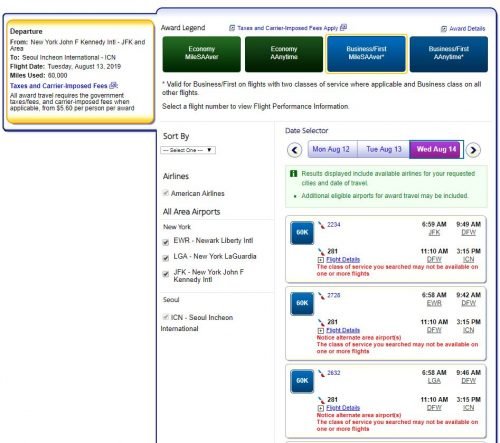 However, availability is beyond scarce, so I wouldn’t count on it.

American’s 60,000/80,0000 redemption rates for Business and First Class seats to Tokyo, coupled with a great Japan Airlines availability, is yet another sweet spot in the American AAdvantage program.

Filed Under: Miles and Points
← American AAdvantage Sweet Spots That Are Still With Us
Are Spirit Miles Worth More Than Magazine Subscriptions? I’ll Help You Decide! →
0 0 votes
Article Rating
Subscribe
Login