And the winner is… Wait, later about that.

The whole idea or a huge part of why this hobby even exists, is fighting the man. Or men. Men who have fought a good fight to keep us away from getting into that lie-flat seat, gorging on gourmet food and gulping down Dom Peringnion without even as much as tipping. There are people who travel for that exact experience and nothing else. Sad but true!

Some folks in this hobby love saying how easy it is to collect miles and how hard it is to spend them. I do not completely agree (on both counts), but it’s not like they don’t have the point. All these arcane loyalty program rules make learning how to hack necessary if you want to maximize the value.

So what’s with business class flight deals and much improved availability? Why have the captains of the industry opened the safe? I submit that it has never been this easy to redeem miles on premium class travel as it is now. No hacking needed. WTF!

Fact: Delta has incredible business class availability to Europe and beyond for the late summer and fall.

Fact: American and US Air have incredible business class availability to Europe and beyond on their own metal (rather than British Airways).

I have no idea how to explain this, so I won’t even try. It might be as simple as a star alignment. I mean, look at this. You might think this is business as usual, but it might be that the Universe is trying to tell us something. The next thing you know–boom! The lie-flat guardians have opened the floodgates! 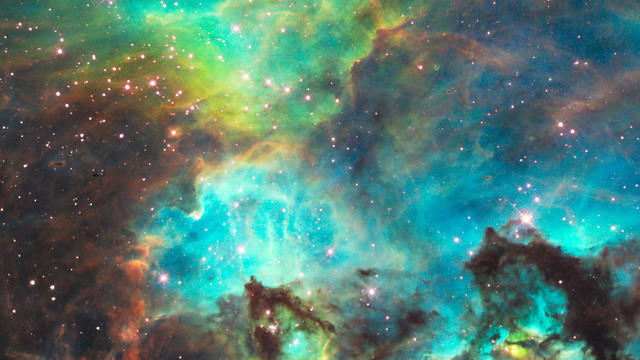 So this is why American Airlines has opened their business class availability!

First, there was Delta!

If you haven’t read my “white paper” on how Delta got her groove back, you are hopeless! Luckily, you still have a chance to redeem yourself by following these links. When you are done, you will have no choice but to agree that this loveable SkyPeso thingy does not apply anymore.

Well, until they decide to screw us up again, of course. That’s a given.

Delta SkyMiles 2015: Agonized, Tantalized and Analyzed Part One You Really Need to Know!

The point is this: Delta has fantastic business class availability to many destinations worldwide from many US hubs. I noticed this amazing availability back in September 2014. Not only have they not fixed that “glitch”, they have considerably improved upon it. For example, back in September, there were rarely two or more seats in J, available on the same flight. Now, there are loads of them, including partners. That’s not a glitch. That’s a policy!

Then there was United!

About a month ago, United surprised everyone by reducing business class awards on partners to the levels of United own metal (scroll the link 2/3 down). What it means, basically, is this.

It wasn’t exactly like that at the beginning (that’s for miles/points historians), but this is where things stand now. You can get a business class on Lufthansa, Austrian or Turkish for 115K miles round trip, and availability seems to be quite good. Or you can fly Thai, Singapore, Asiana, or any combination thereof for 140,000 miles to Asia.

And since this is United miles you’re spending there are no fuel surcharges at all! How cool is that?

Very cool, but irrelevant. Because AA has blown both, Delta and United out of water by opening up their own vault.

Why should you book an American Airlines (or US Airways) business class seat rather than Delta or United? Well, for one thing, Delta has this mind-blowing business class availability to Australia and NZ on Virgin Australia. I would save my Delta miles for that trip. 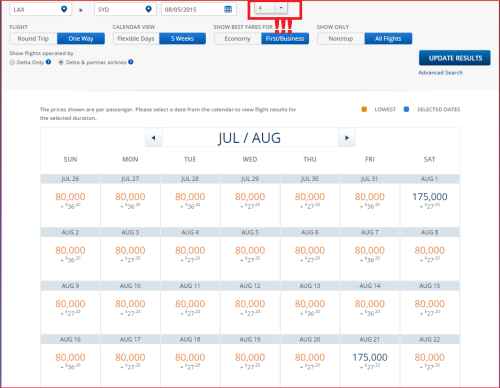 United? The United business class flight deals to Asia are not that great (70K miles instead of regular 80K) an they are worse than regular American levels. Their reduction for a business class seat to Europe is better (57.5K vs. 70K), but still not good enough. Math doesn’t lie.

Not convinced? Well, if you are dying to get a taste of Lufthansa, Austrian, or Turkish, there is nothing wrong with that. But if a simple lie-flat seat satisfies your cravings, I would save 15K-25K miles per roundtrip and go with American. American has fully flat seats in their 767’s on some routes like London and Paris, and so you can easily route your flights via London on American if you want to avoid angle flat (I know, oh humanity!). Like on this JFK-BCN route (the price shown is for 2 people). 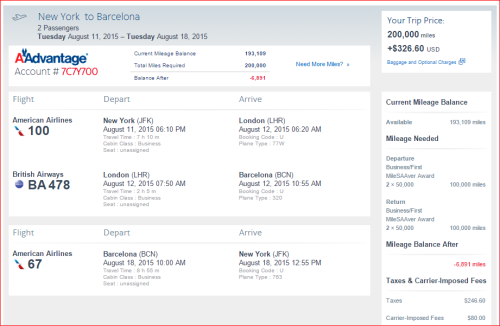 If you don’t mind angle-flat seats and do mind paying extra (Heathrow taxes and BA carrier-imposed fees take their toll), then you can fly non-stop, too. There are fewer available dates for two people, but they do exist. Me–I’ll gladly grab an angled seat to save over $200. 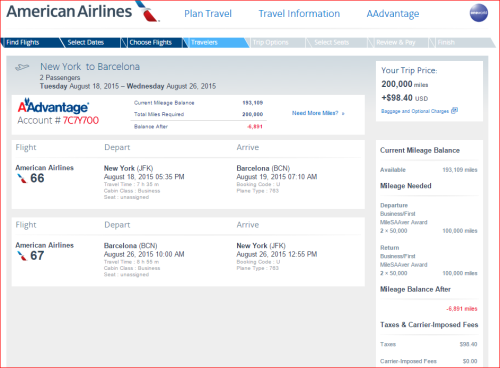 So how good is AA availability?

I have checked plenty of destinations out of NYC, DFW and Chicago for August and early fall, and in most cases found availability to be from good to outstanding. To save you some time, below are the screens of non-stop flight on American Airlines only. Why? Simply to avoid confusions–there is plenty of availability on British Airways, but you know better than to take it. In addition, I’m searching for at least 2 seats on the same flight, which, of course, reduces availability, but I love a good challenge. 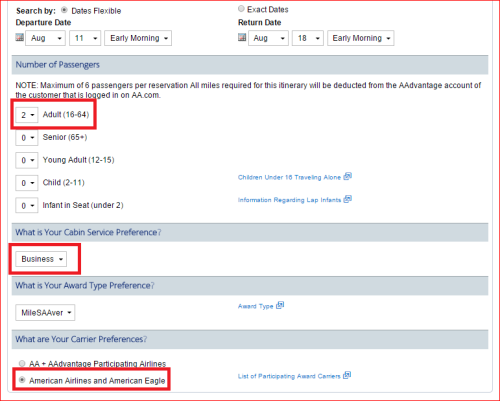 Fortunately, there is no resistance from AA. Here is New York to Paris. 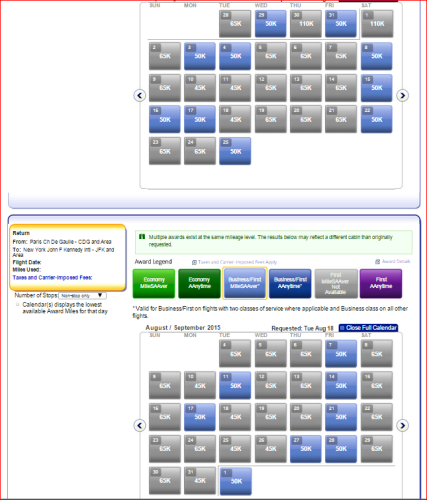 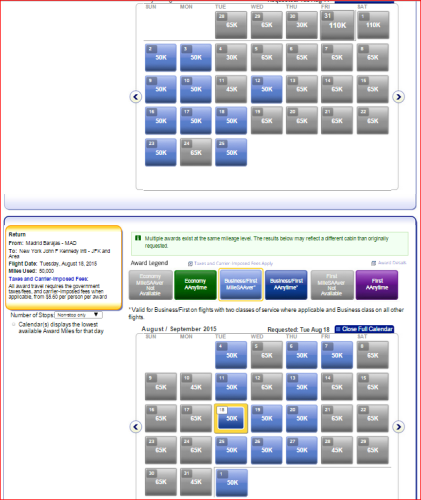 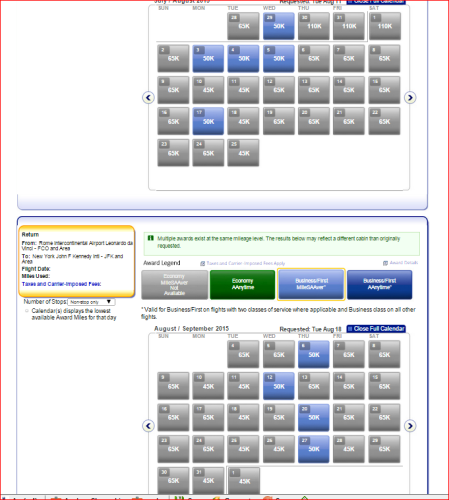 In my research, non-stop availability to Milan was poor with only two flights available in each direction, and to Zurich i was simply non-existent. But then I searched with partners again and had no problems finding two seats on American that would take me across the pond with British Airways taking over from there. As you can see, flying via London in both directions, as well as using British Airways will cost us $264 pp in fees and taxes. But the point is: if you want to go almost anywhere to Europe in business class–you can! At least, for now. 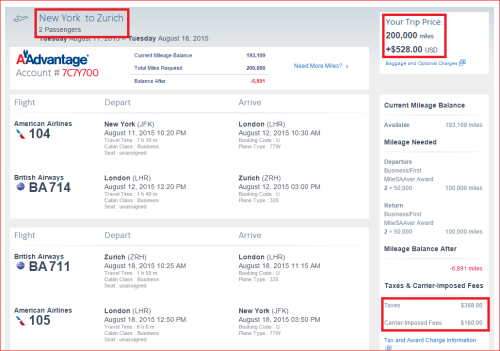 But it’s not just Europe. Brazil availability is off the chart to Rio and slightly less impressive to Sao Paolo. Here is Rio, where American flies 777s with fully flat beds. 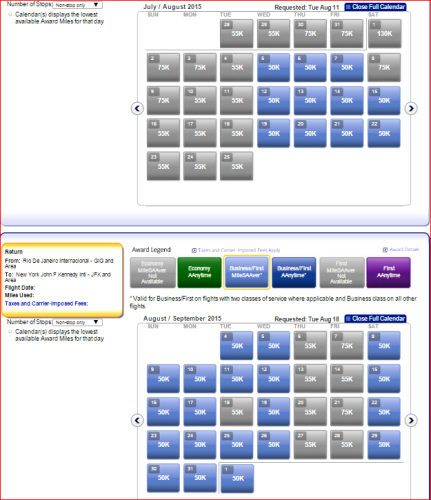 However, not everything is rosy. I was unable to find any availability to Buenos Aires, Lima, Honk Kong, or anywhere to Asia on American metal. However, availability between Miami (or NYC or Dallas via Miami) and Santiago, Chile is pretty good in first class, despite being non-existent in the business. Odd. 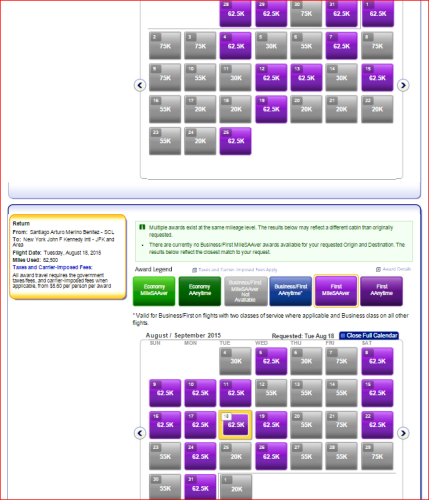 So what are these guys doing? Any theories? By unlocking premium seats–are they trying to reduce the number of outstanding miles they owe? Quite honestly, I have no idea what airlines are doing, but it doesn’t mean I’m not loving every minute of it. Made a couple of bookings already, because who knows how long it is going to last.

Andy, great post..do you mind sharing where you are planning to travel?

Booked a non-stop AA to Paris with mom for late summer. But still considering other “mile-blowing” options. 🙂

I booked AA to LHR, coming back from CDG… in coach though..:)

I’m flying AA to BCN in April/May for 40K OffPeak, too. I’m sure, you and I will both live through this dreadful experience. 🙂

[…] won’t believe how excited she is about it. I got us two non-stop business class tickets on AA during that short window when they were wide open. While I could live without “non-stop” and “business class” for a shortish […]