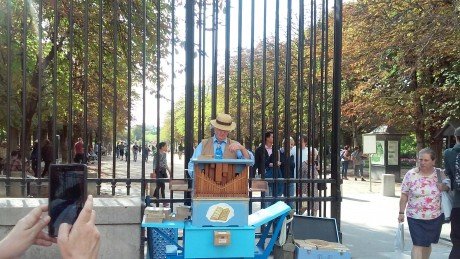 Street Organ in Front of the Luxembourg Garden

We flew non-stop from JFK in new lie-flat business class on American. Pretty good! The crew on the way there was OK, but on the way back—excellent! The food was decent, especially fish, although the steak was a little tough. The bed is a weak link. It was a little narrow for me, which was to be expected, though, as I’m a big fellow, and the 767 is a narrow-body craft, but all-aisle access is cool. What I didn’t like at all was the tablets. I love to have my entertainment with a meal, and these wires kept tangling, and 10″ screens are plain small.

And they broke the battery from my mom’s scooter (although they are promising to rectify). 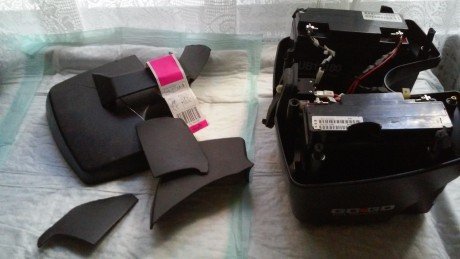 Since I was traveling with my scooter-bound mom, it added a lot of challenges to the trip, some that I anticipated, and others I did not. One thing I can say is that I’m really happy I didn’t listen to Paris landlords and refrained from renting a non-air conditioned apartment. It was hot!. Not 100-degree hot, but pretty hot nevertheless. We would’ve been miserable without a good AC. If you travel to Paris in the summer, dismiss whatever they tell you about “dry heat”. Dry heat, my ass! Either avoid Paris in July or August or insist on air-conditioned accommodations, no matter what they tell you. During our 6-day stay in Paris it was hot and muggy 5 of them. So—you’ve been warned.

I will write a more detailed review, but for now, just a few factoids. We stayed at the Aparthotel Adagio Paris Centre Tour Eiffel, which was indeed close to the Tower—they claim it’s 15 minutes away, and they didn’t lie about that. We stayed at a small 1-bedroom apartment with ridiculous but perfectly functional furniture, and having two rooms, albeit small, gave us the privacy we both needed. In addition, having a kitchen (and mom who loves to cook) saved us tonnes of money on food. And yes, I know, for most of you, it’s a travesty to eat at home in the gastronomical capital of the world, but first of all, we did eat out sometimes, and second of all, you can’t argue with cheap. Well, at least, I can’t 🙂 So, here.

Anyhoo! Back to miles and points. What’s cooking?

First, my best credit card lists in the world are updated.

Second, it’s this time of the year again, and AMEX has added 5,000 points to both of their SPG offers:

Remember that according to the AMEX’ new policy, you can’t receive the same bonus twice—but that’s for personal cards. You can receive a business card bonus as long as you haven’t had the same product for the last 12 months. Having said that, there is anecdotal evidence that some folks have managed to receive the same bonus twice even after there new policy went into effect. Try it at your own risk.

The limited-time Chase Marriott 80.000-point plus $50 credit statement offers (personal and business) are set to expire on August 31. Historically, this is the highest offer, you can get. If you despise Marriott for their latest massacre, I don’t blame you, but if you can still use their points, you should consider taking them up on this offer.

And speaking of expirations, there is another one

I’ll just quote the email I got from AA, because I’m, well, lazy.

This is an excellent offer, but I am not converting. I love my SPG points and can never have enough of them. But if you are considering the move, you might want to hurry up.

New York to Miami for $80 Round Trip

No, it’s not a joke. American, US Air, and Frontier offer sub $100 RT flights between New York and Miami. HT to DansDeals. 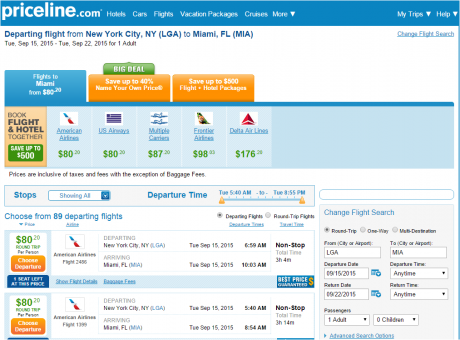 I checked these dates at around 2AM EST, and most were available, albeit some with only one seat.

Have You Received that 1-Night Club Carlson Certificate from US BANK?

What right do I have to be angry? Do they owe me a free night?

Did they promise me a free night?

Then why on earth do I feel outrage when I can’t find this elusive email in either mine, or my wife’s accounts?

Because other people have received it. And that makes me feel inadequate. Jealous. Mad!

We are strange and weird animals, humans. ‘Nough said.

Another epic price mistake has come and gone—quietly, this time 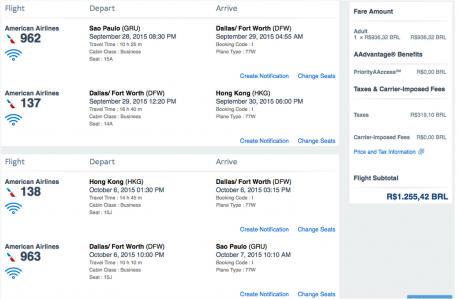 Yesterday you could—theoretically—buy a business-class ticket from Sao Paulo to Hong Kong for $360. Why theoretically? Because you would have to book it on a Brazilian AA website and (sigh) stretch the truth about your place of residence.

I caught it too late anyway, but wouldn’t have partaken even if I could. First, GRU is the hell of a positioning flight, second, I feel uncomfortable by stretching the truth to this degree, and third, these confirmations will be canceled. Well, 9 out of 10 they will.

No, we haven’t missed anything, you and I.

Another Manufactured Spending Technique might be biting the dust

According to this FT thread, some portals are restricting AMEX GC cashback to $200 denominations. And that’s just when you thought Plastiq was still good for something. This is developing as some portals are still working, so we’ll see.

Have I missed something? I’m sure I have. Tell me what.