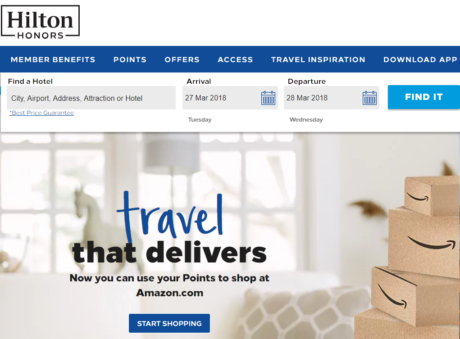 Using Hilton points on Amazon gives you 0.2 cents per point. Is THAT where the program is going?

On February 20, I posted about cheap Hilton sweet spot redemptions in the Americas and Europe. On February 26, I posted another piece on redemptions in Asia, Africa, and the Middle East. Guess what: in just one month, Hilton has managed to devalue some of these properties. Gee, how dynamic of them!

The History of Hilton Honors Devaluations

Just like most other hotel chains, Hilton Honors (then HHonors) used to price their hotels and resorts by categories. Category 1 hotels cost 5,000 points, Category 2 hotels cost 10,000 points, etc., so the members could tell how many points a property would cost. Just like other hotel chains, Hilton would devalue change categories once a year, and, while these devaluations sucked and people kept bitching, members did have an idea how much they would have to pay for a hotel room until the next-year devaluation. That was a conservative and common-sense thing, and it meant that Hilton couldn’t devalue their redemption rates on a whim.

That must’ve sucked, and in 2015, Hilton executives came up with an elegant solution. “What if,” they must’ve figured, “we devalued our redemption rates not just once a year, but once every couple of months? Wouldn’t that be swell!”

And it was – for a while. But there was a problem; Hilton still couldn’t devalue as fast and as often as they would’ve loved to. Equally troubling was the fact they still had to publish the lists of changes. That made no sense for Hilton Honors people, who were looking in awe at whatever Delta Airlines was doing with their loyalty program, so when Delta boldly axed the SkyMiles award chart in its entirety in 2015, the fate of the Hilton Category chart was sealed, too. Why offer any kind of transparency to Hilton Honors members when it’s so easy to keep them in the dark?

So in 2017, after a series of experiments with “dynamic” pricing, Hilton decided it was time to go full throttle and remove the categories altogether to make sure the members had no idea how much one property or another is supposed to cost in points. In other words, they can now turn a Category 1 hotel into a Category 2 hotel virtually overnight without any warnings and notifications, whatsoever.

And, oh boy, have they been wasting no time!

There have been other changes, too, that are less pronounced, so check these updated posts again.

So it’s only three hotels, what’s the big deal?

For the sake of fairness, Hilton did add some real benefits to the program in 2018, the most important (to me, at least) being the elimination of the transfer fee for sharing points between friends and family. But the outrageous lack of transparency (and the casual way Hilton approaches devaluations nowadays) are not instilling confidence. Hilton might feel it can afford to act like Delta, but it might be a mistake. After all, Hilton is not one of the only three major hotel chains in America.

Filed Under: Miles and Points
← 30% Bonus for Citi ThankYou Points Transfer to JetBlue and What You Can Do With It
The New Chase IHG Card Offer — How Doest It Compares to the Old One, and Should You Apply? →
0 0 votes
Article Rating
Subscribe
Login

Thanks for the update. As always, it’s a pleasure to read your article. Even if you must regretfully share unhappy news, you make it interesting and fun to read.

[…] Titan cries of injustice while you push their Hilton credit cards non stop…Ok, here is the latest on the Hilton devaluations.  And here we have a nice research job on the Hilton Honors Award Category Changes April 2017 – […]