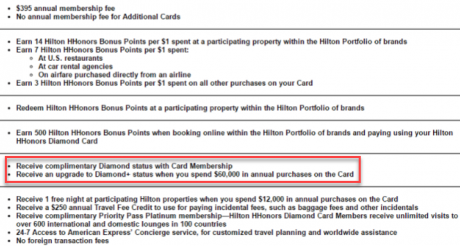 In case you, guys, are wondering where the hell I’ve been, I’ve been in Asia. Hong Kong, Bangkok, Manila. As in, was in Hang Kong, now in Bangkok and in a few days I’m going to Manila for TBEX – the Travel Blogger conference. Currently staying on the “wrong side” of the Chao Phraya River, in an Executive Suite of Millennium Hilton that I got for about $30 a night after haggling a little bit for the upgrade on my rewards stay. The suite is awesome, but that’s a post for another day.

I barely manage to blog anything while I’m not on the road, and so here I am — in this sweltering city, in my sweaty “excursionist” (got it?) bliss, and then I go ahead and find this piece about the new proposed Hilton “initiative”. Say what?

Per Doctor of Credit:

American Express are considering a new card to their Hilton line up, called the Hilton HHonors Diamond Card … It’s also interesting that it says this card would come with Diamond status and the ability to earn Diamond+ status (something that currently doesn’t exist as far as I know?).

Why on earth would Hilton need another Diamond+ elite level? To offer exactly what?

Honestly, all hotels’ gimmics like “digital check in”, the free 20-cent-per-bottle drinking water, “express checkout” and their undying gratitude for me being an elite member do not impress me the way they’re meant to impress. All I care for about a hotel’s elite level is FUFBFF — Free Upgrades, Free Booze and Free Food. These are the bennies that really impress me and make me eternally grateful, especially when I stay at Hilton, where it’s essentially up to an individual hotel to make you either happy or just barely satisfied.

And the thing is, Hilton does give these essential benefits to both, Golds and Diamonds. An individual property might choose to treat Diamonds better than Golds in terms of upgrades, but it’s never guaranteed. Since I made Diamond, I’ve never experienced more love than I did being a lowly Gold. Maybe it’s just me.

Check Hilton Gold and Diamond benefits for yourself if you think I’m missing something.

For one thing, Hilton could offer guaranteed upgrades to suites. Starwood, Hyatt and Fairmont offer them for the top elite level, but Hilton does not. It only promises upgrades to “more desirable” rooms, which can be anything. In terms of the Millennium Hilton where I’m staying, some regular rooms are even better than “upgraded” executive rooms, although that might boil down to a personal taste.

So, my question is this: why “create” the new Diamond+ elite level out of thin air when all you need to do is beef up the existing Diamond benefits?

Or considering that the survey that mentioned Hilton Diamond+ came from American Express rather than Hilton, maybe we should ask ourselves this:

Did American Express painted itself into a corner?

Look, I get it. Credit card executives don’t like gamers. They want to get rid of gamers. They hate gamers on profound and very personal level. They must feel about gamers the same way casino execs feel about card-counters — how dare these pathetic little worms wiggle into our profits! Let me state this for the record– it’s not unfair, and if I worked for the industry, especially in times of economy upturn like now, I, too, would be concocting ways of getting rid of churners. What fair is fair.

But I promise you, I would never, in a million years, come up with something as fundamentally stupid as once-per-lifetime policy.

Someone who applied for your card and got rejected because she had received the sign-up bonus 2, 5, or 10 years ago is not a churner. She probably forgot ever having applied for this card. Now, she’s pissed at American Express. And there are customers with who you have a once-per-lifetime chance to convert. Congrats on cutting off your nose to spite the face.

Now that American Express has lost Costco and JetBlue; now that it’s [probably] going to lose Starwood; now that Chase has shaken the whole nation with Sapphire Reserve — now what?

American Express is feverishly trying to counter the bold (albeit crazy) Chase’s move but being reactive rather than proactive, they always react in half-measures. They’ve added a few nice benefits to both personal and Business Platinum cards (5X on airfare and 50% rebate on airline point redemptions are very nice touches), but their other earning rates, as well as Priority Pass lounge access (only the cardmember is allowed for free) still suck compared to Citi and Chase. Adding some isolated benefits to existing credit card products is not going to make American Express competitive again.

So what if American Express and Hilton have concocted the idea of this Diamond+ thingy in order to create a new credit card?

Wouldn’t it be easier for American Express to replace the once-per-lifetime clause with something more reasonable and for Hilton to better differentiate between the Diamond and the Gold? To you and me — maybe, to AMEX execs — maybe not. There are reputations at stake, and perhaps something even more precious. I suspect, admitting that once-per-lifetime was an expensive mistake could cost some folks their jobs. From this perspective, creating a new credit card product with a corresponding new elite level that everyone would be eligible to apply for, might feel like an easy way out, especially if Hilton is willing to play along.

Which reminds me — how about a 75% discount on laundry services for Diamond members, huh, Hilton? I’m almost out of t-shirts. 🙁

Of course, it’s just a theory, and neither Hilton Diamond+ nor a new American Express credit card may ever materialize, but I think it’s interesting that these ideas are in the works.

What do you think about the prospects of Hilton Diamond+ elite level and new AMEX Hilton Elite card?

I think you’re right that it’s smoke and mirrors and Amex is self-deceived to the point that they don’t even understand the problem, let alone the answer. I’m hoping that the changes we’ve seen recently (Platinum Biz 100k, x5 airfare, etc etc) is their last ditch effort before major positive changes begin to happen out of pure desperation. This could simply be wishful thinking on my part.

Amen to that! I feel the same way and hope you and I are right.