Two new Amtrak credit card offers have quietly arrived and they are much better than I expected.  The cards are issued by BofA, which is a good and the bad thing at the same time.

Good because it ain’t Chase. Bad because of Alaska. Churning Alaska Airlines bonuses is more important any which way you look at it, and how many cards you can really churn with BofA has become an issue for debates lately.

Still, these two offers are awesome. They remind me the best ever 32,000-mile bonus that my wife and I were able to take advantage of  back in 2012. It has never been repeated.

But what about the annual fee? Well, I think it’s totally covered by some goodies that go with a new card.

While you might not believe that a lounge access is a tangible benefit (I’ve read less than stellar reviews about Amtrak lounges), there is no way that a companion coupon and One-Class Upgrade wouldn’t be worth $79. And it seems that a companion coupon is a real thing and does not require to buy an overpriced flexible rate ticket. 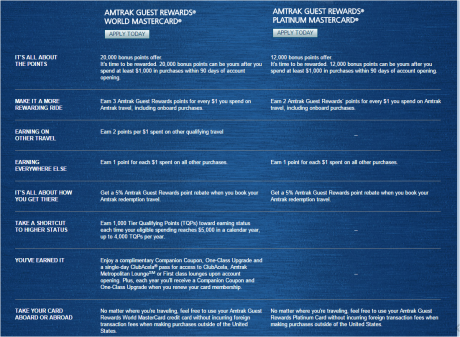 Despite some overly dramatic blog headlines you might’ve seen, it’s not that easy. For some people things are getting worse, while for others they are getting better. But no matter what, you can book travel at the old levels until 1/24/16.

In general, an AGR point will be worth roughly 2.9 cents for non-Acela travel and 2.56 cents for Acela. (For example, 5,141 points will be redeemable for a WAS-NYP regional one-way $149 ticket.ticket.) However, several new restrictions will result in a lower yield for award redemptions:

UPDATE: Sorry, turned out it’s not a good option.

It’s notoriously difficult to get Choice Privileges points (Comfort Inn, etc.), and these points can have amazing values in Europe and Japan. From what it seems, Amtrak has not updated their T&C for transferring points (they still mention Chase credit card), so provided the terms remain the same, you should be able to transfer up to 25,000 miles into 75,000 Choice Privileges points annually after spending $200 on Amtrak travel. Combine that with a 32,000-point bonus from the Barclays Choice Priority card, and you might get around 110,000 points in the first year, or up to 11 nights in Europe, especially in Scandinavia where a hotel night costs an arm and a leg. 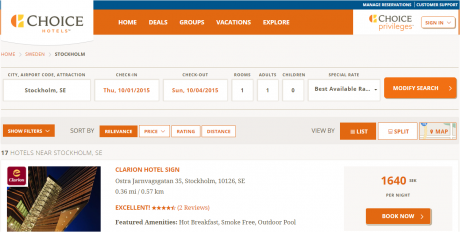 Imagine that the new cards will indeed prove to be churnable—that might bring in infinite supplies of a very valuable currency!

Nice detective work, especially about the Amtrak to Choice options. Might allow our family to travel in Europe affordably. We have a lot of AA miles and Avios so not too concerned about flights. Don’t have Club Carlson card, I guess that’s another option for Europe. Too bad about no more 2nd night free though. I’m sure it was good while it lasted for those who used it!

Thanks Kent. Amtrak to Choice is a good option, especially if there are two of you. Easy 150,000 points, although Amtrak does make you jump through the hoops.

[…] Traveler’s Handbook argues the value of the new Amtrak cards from Bank of America, while Travel is Free finds hotel transfers to Choice will now require $20,000 […]

But if I have to spend $20k per year in order to transfer to Choice (like you said in the mass email), then I’m not sure this is a great deal…?:-(

And you’d be right. I need to update this post, the transfer option might be not a great deal with these new T&C