As you know, IHG Rewards Club has quietly “enhanced” its program by raising redemption rates for 200 of their popular hotels and lowering rates to 200 of their “Meh” hotels. Not being an over-spoiled fellow, I was positive that I would find some gems among the properties going down in the category, even if not in the major cities or the most desirable locations—but surely, I thought, there would be some hotels in interesting, must-visit locales that I wouldn’t mind flying to, due to the increased value, created by this, otherwise unfortunate, event.

So how many such places do you think I’ve found? Well, I’ll spare you the suspense, so you could stop reading now if you wish. I’ve found one! Well, maybe two, but only if you have to be there.

One hotel where booking on points after the deval makes sense, is Holiday Inn Hotel & Suites Tampa N – Busch Gardens. Located just 1 mile from Busch Gardens, the property has gotten reduced to 10,000 points down from 15,000, and its cash price seems to hover at $140-160. Since you can”purchase” IHG miles for $0.007, booking this hotel on points is a no-brainer. It’s a good value.

Another hotel is Holiday Inn Kuwait-Downtown. I have not heard a lot of things of Kuwait City being a touristy place, but if you need or want to go there, the cash price seems to hover around $240 and more, which makes it a terrific value at 20,000 points. Again—if you’re going there anyway…

That’s it! That’s all your sweet spots.

Don’t get me wrong. There are some interesting hotels among those getting the reductions. There are hotels in Jawa and Bali, in Italy and Nepal; there is an HI in Manaus, which you should consider if you want to explore the Amazon. There are plenty of hotels that have been reduced in China and India—the problem is, none of them seems to be a good value when booked on points vs. cash. When a hotel room costs $30-50, why would you pay 10,000-20,000 points for it? It makes even less sense if we remember that we don’t get any points for award stays.

Can you imagine how insanely overpriced the IHG redemption rates used to be before these reductions… if they still are?

The increases of course go in the opposite direction. Increasing levels for every property that people actually want to stay at, at least, makes fiscal sense, but there are increases that simply make me scratch my head. They believed, for example, that charging 35,000 points for the HI Fort Walton Beach was too generous. Now they want 5,000 points more—for a hotel that can be yours for about $120. Smashing!

Race to the bottom

The new IHG redemption rates are effectively creating two new tiers at 55,000 and 60,000 points. Some levels are increasing by 10,000 points.

Although IHG Rewards Club has wisely decided to have the same number of properties moving up and down, you can bet that those hotels where people actually wan to redeem are steadily moving higher in point requirements.

Wisely indeed! No formal announcements, no email alerts, just a webpage that dumps every change into one table, hoping (wisely, again) that most people won’t “waste” their time trying to figure out what’s what.

Of all the posts devoted to the IHG Rewards Club latest massacre, John has also created the best visual guide to the devaluation.

It hasn’t happened in one day, but the IHG’s consistent slide toward the world’s worst hotel loyalty program is now complete.

The IHG Rewards Club program has never been on par with SPG and Hyatt, It did gain some steam after the draconian Hilton devaluation. Then the Marriott massacre hit, and all of a sudden they didn’t look so bad, until now.

The butchery is so terrible indeed that it begs the question: is the IHG Rewards Club trying to make its own rewards program irrelevant?

These “enhancements” have not been perpetrated by some clueless low-level employees. They do have a system, which is to make points redemptions unprofitable for the members. Here is one, very typical example. 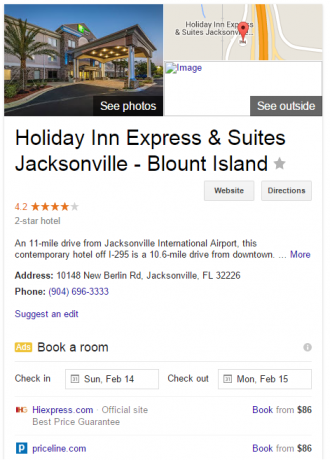 So, basically, IHG is telling me,

…see, if you’re not an idiot, then you won’t use your points; you’ll get your room for cash. And if you ARE an idiot, I’m still fine with it since you overpay at least 300-400%. And in the meantime, we’ll keep running all our crazy promotions giving your some crazy points for your money, because we don’t care how many points you get—we’ll take them away from you just for a one-night stay in a run-of-the-mill location.

Well, I’ve got to say, it’s a perfect scheme. Until your members get fed up, that is. But, perhaps it’ll never happen?

Why you need to speak up

Are they going to cancel the devaluation because you told them so? Not a chance! Let’s be realistic.

But if there is no pushback, they will keep at it, and they will push and push until they get a clear message that they’ve pissed off a lot of people. Then and only then, they might consider threading more lightly in the future.

This is a horrible devaluation, both in terms of the damage it inflicts and especially in terms of a mean-spirited execution. With no announcement and no alerts, they are giving people 17 days to redeem points for the old levels. If you don’t read blogs—and most people don’t—there is no way you would find out in time! This is not what a “loyalty program” is supposed to be about, unless you consider old Wyndham the gold standard of loyalty.

A while ago, I posted a comment on TBB calling people to express their disappointment about the ANA devaluation. The devaluation itself was not too bad, but they only gave us 2 weeks to book rewards at the old levels. I received this unfortunate answer from one very experienced hobbyist.

The FFP has set their plan and is going ahead with it. Some fake/astroturfed murrican shitstorm is not going to change that, you’re not their core audience :p

That’s true, even though there have been exceptions when a loyalty program pedaled back after backlash from the members (Delta and Thai Airways come to mind). But what so many people fail to understand, this is never about the current devaluation, it’s always about the next one. While devaluations are inevitable, their ferocity is not. But if we don’t speak up, we’ll never know.

[…] Guess How Many Sweet Spots I’ve Counted in the New IHG Rewards Club “Enhancement” by Lazy Travelers. That’s the problem with these devaluations, most of properties that have gone down in price have incredibly cheap paid rates. […]

Excellent analysis, Andy. I fully agree with you that IHG is the worst amongst standard rate redemptions. I was looking at hotels for my upcoming stay in chennai, India, where you normally tend to get good value for your points including Marriott and Hilton, IHG point redemption turned out to be the worst. 30000 points a night for a hotel I could book at around 100$ excluding cash back for bookings. Even for Hilton I was able to get $150 per night stay for 23.5k points using the special rate. Even taking std rate of redemption would cost only 32k… Read more »

You’ve summed it up nicely, Kumar. It’s a joke!

I’m just in it for the $49 “free” night annually. And then one day I’ll find myself in Porto and blow all those points I supposedly have – not much more than 80K each for us, because we’ve never purchased or used – on the Palacio das Cardosas. And it’ll be worth it.

Hotel loyalty is a one-way street, in my opinion.

I agree! The $49 free night is the best thing about IHG.

[…] Lazy Traveler digs into the IHG Rewards devaluation to find gems, you won’t believe what he found!   He appears to be doing this type of angry posts […]

[…] of the changes are intriguing, to say the least. So not a zero sum. but not nearly as terrible as the IHG atrocity (yeah, you can tell, I’m not over that […]

Last time I went for their “Into the Night” promotion “2 nights or 50K” points. I couldn’t use the 2 certificates because most of the Hotels I wanted to book, they were not participating at those dates!

NO MORE IHG promotions for me!

I enjoy reading your thoughtful articles and mostly agree with you. Although the rise in redemption prices is always regrettable, the new IHG prices more accurately reflect the cash prices at those hotels. Using a value of 0.6 cents an IHG point, they still are good redemptions. I see it more as an adjustment than a major devaluation. I think great value can be had from IHG. I recently had good redemptions in at IC Moorea, IC Bora Bora, HIX Kailua Kona, and most recently at IC Sydney and HI Auckland. And although promotions vary, my DW and I have… Read more »

I’m glad you’re getting a good value out of IHG, but it’s just not working the same way for me. I’ve noticed that I rarely stay at IHG hotels, points or cash. For whatever reason, I do find better value with Hilton or even Marriott, not even mentioning SPG. I love finding sweet spots in devaluations, but I’ve found the latest one just a bit too much. But again, we all have our own patterns.