I’m baaaaaaaaaaaaack! Kinda. Still working on my books’ 2018 editions, still grappling with the workload. Still traveling. But something has been amiss, so I’m gonna admit that having my own platform for saying what I had to say was addictive. I’m just going to try and do what I can when I can, meaning posting maybe 2-3 times a week. We’ll see.  Read how Avianca strike is hampering my travel among other thing. On the 24th, I’m flying to Dallas for FinCon. For those who don’t know, this is a conference for financial bloggers and freelancers. I’ve been there 3 times in the last 4 years and love it immensely. It’s a great place to make connections and get some freelance gigs, but it’s also a chance to meet some really smart and super-friendly young people who, unlike me, know how to do it (the blogging) right.

I was also planning to combine my trip to Dallas with travel to Colombia and Peru. And I was really looking forward to this voyage because:

So, here is what my plan was:

It all worked out beautifully at first. Booked my first ever (don’t laugh!) Southwest flight for 5,800 points. Booked Delta Comfort Economy for 13,500 SkyPesos (just 1,500 more than a regular coach seat). Booked a round trip to Colombia with an “Excursionist Perk” (LOL) to Peru for 70,000 miles.

And then the unthinkable happened!

Avianca rescheduled my flight due to the pilots’ strike, and I couldn’t believe it when I saw the alternative. Instead of a nice 7-hour nonstop night flight, I now was offered this: 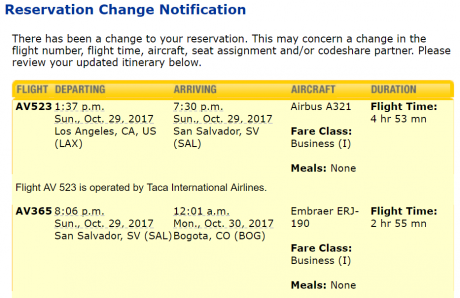 Never mind it was a connected flight, I couldn’t have made it anyway. My original flight from LAX was scheduled for around 9 PM, and my Delta flight from DFW would bring me to LAX at around 5. Now, with the new schedule, I would have to get to LAX no later than 12:30 PM. And after spending the whole day between airports, it would cost me an extra night at a Bogota hotel.

Then something interesting happened. United called.

Now, schedule changes have happened to me in the past. An airline would sometimes send an email or, in some cases, it would cancel a flight without notice. But I’ve never before experienced a proactive approach when an airline would not only email me, but call. Although it wasn’t Avianca, it was United since I booked with MileagePlus miles.

Unfortunately, even though the agent tried her best, nothing worked for my plans without requiring a few troublesome fixes. She offered to fly me on a nonstop from LAX the day before, but that would mean missing a whole day of the conference. That was a no-go. Who would trade business mixed with pleasure for pleasure, right?

She also offered to fly me via Houston and San Salvador on United in economy… with over 7 hours of layovers. Another option was hopping via MIA with an overnight layover… In the end, I decided it wasn’t worth the trouble. I’m flexible enough to take a separate trip from New York to Colombia at a time of my choosing. And on a nonstop flight.

Still, kudos to United for being so proactive.

I’m also going to lose my 13,500 SkyPesos for the DAL – LAX flight, unless I elect to pay the $150 “redeposit fee” with a hope of getting it back with Citi cancellation insurance (I paid with Citi Prestige). If not… Well, do you still value Delta miles at more than 1 cent apiece after everything they’ve done to the program? I’m not sure I do.

Next: How I Booked My First Cruise Ever

I’m so happy you’re back; one of the best. Really missed your reporting, and was always concerned.