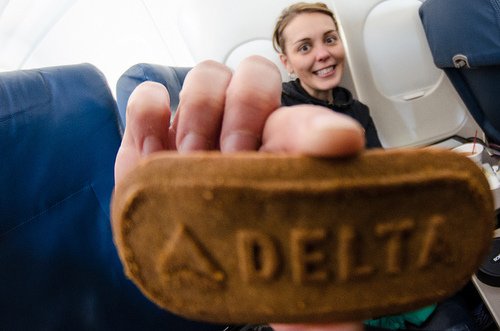 The list of Delta Airline’s transgressions against their SkyMiles members is a long one.  Aside of the two-part SkyMiles Massacre production AKA Delta Smacks United, here are other examples of their never-ending onslaught.

In the last two years, Delta did this:

Is this the whole list? I’m sure it isn’t. So feel free to make your own list or add your favorite Delta pet peeves in the comments.

No, they haven’t. Most are still with Delta. And they will remain with Delta. Some are captives, and other simply don’t matter. Well, I completely understand why I don’t matter–I am not a business traveler–but alas, all of you, sky warriors, don’t matter, as well. I loved this quote from Joe Brancatelli’s article so much, that I had to bookmark it. I read it almost a year ago.

“It proves what I always thought about airlines. They don’t respect us,” Justin Elfson, a 120,000-mile-a-year business traveler told me by email after Delta’s announcement. “I wouldn’t treat my customers this way. Why do airlines think they can run their business this way?”

And why can they afford to piss you off, you wonder? Because in the airline industry, bad behavior is awarded and encouraged. Oh, and also because nobody cares.

Which brings us to the latest Delta Press Release:

AIRLINE FIRST TO BE RANKED NO. 1 BY CORPORATE TRAVEL MANAGERS FOUR YEARS IN A ROW; DELTA VOTED HIGHEST IN ALL 10 CATEGORIES

If you think that these Business Travel News ratings are irrelevant, you are wrong. They are submitted by people who really matter: your company’s travel department. In their view, every anti-loyalty action Delta has done in the last two years, including their new atrocious revenue-based earning system, means nothing, because they have not impacted corporate bottom lines.

If they not only do not push back, but reward this behavior with the vote of confidence in the airline, it may mean one thing only: the concept of rewarding loyalty is dead. Long live rewarding HVCs–High Value Customers.

Travel managers care for other things. Things like better planes, better performance, better flexibility, and most importantly, better customer service. Delta is, without a doubt, a better US-based legacy airline. It might be marginally better, but better nevertheless.

Sapient director of global travel and client experience Michelle DeCosta had particular praise for a program that Delta introduced in 2013, in which travelers from large corporate accounts get special recognition when checking in for flights. “When a Sapient person checks in, it welcomes them at the kiosk, and Delta thanks Sapient for their business,” DeCosta said. “People think, ‘Wow, that’s really cool.’ ”

One buyer noted that Delta recently had become the company’s preferred domestic carrier as “they always show extreme interest in providing the optimum customer service.” Another… called Delta the “most partnership-friendly” of the U.S.-based airlines, with “service that has been superior to the other carriers through friendliness, customer service and the willingness to serve at least pretzels.”

Pretzels, you see! Who can argue with that? Of course, there has been criticism, too. It’s not like Delta has managed to cast a spell on everyone.

One area in which Delta earned criticism from buyers was its decision to move Delta SkyMiles next year to a revenue-based program rather than a mileage-based program, a move later followed by United. One buyer expressed concern that the switch would have “a deep impact on road warriors who are required to travel economy.”

Well, no biggies! This is only one area, while there are 10 other areas that travel managers love about Delta. They will get over this little issue quickly and easily. Think about it this way: why would they lose their sleep over your upgrades, lounge access, and other perks? Are you going to stop showing up for work?

DELTANIZATION of the Airline Industry

Of course, as I’m writing this, I’m not thinking about Delta. Or United for that matter–they are already there. I’m thinking about American. In my last year piece Delta Smacks United, I predicted that American would raise their redemption levels immediately after their merger would be approved. Please believe me when I say I was very happy to be proved wrong.

Nowadays, however, American Airlines has no place to go but for the same revenue-based system, no matter what they say (or rather don’t say) publicly. What airline executive in their right mind is not Delta-envy?

Unfortunately, Delta has proven that as long as they build a better airline than the competition, they can get away with pretty much anything from nickel-and-diming to highway robbery. This is bad. For decades, frequent flyer programs have been raking in profits for airlines even as the airlines themselves, one after another, have gone into bankruptcy. The programs are still profitable, but with the economy on the rise and planes flying full, the airlines are getting cocky again. They feel they don’t need loyalty anymore. Or at least, they feel they don’t need it as badly as they used to.

But look at the bright side. I have a few Delta drinking coupons that I’m going to give away tomorrow. Please stop by.

Want to know more about free travel hacks? Sign up for my newsletter (top left). I’m changing a few things around here, since I have been criticized in your emails for slacking out with the newsletters, so I’m going to send at least one weekly digest.  Let me know what you think.

Nicely written. You nailed it with your experience. Even i have to fly Delta frequently just because only they have 3 direct flights a day in my route as against 0 for any other airline. That is a great advantage mainly during winters and if there are flight delays. I just cant risk flying others and have had bad experiences with all. Delta is definitely way ahead in understanding the pulse of majority of its fliers. Other airlines are just pathetic copycats. However i really dont love flying Delta simply for their arrogance and high prices but i have no… Read more »

Agree on all counts, Kumar.