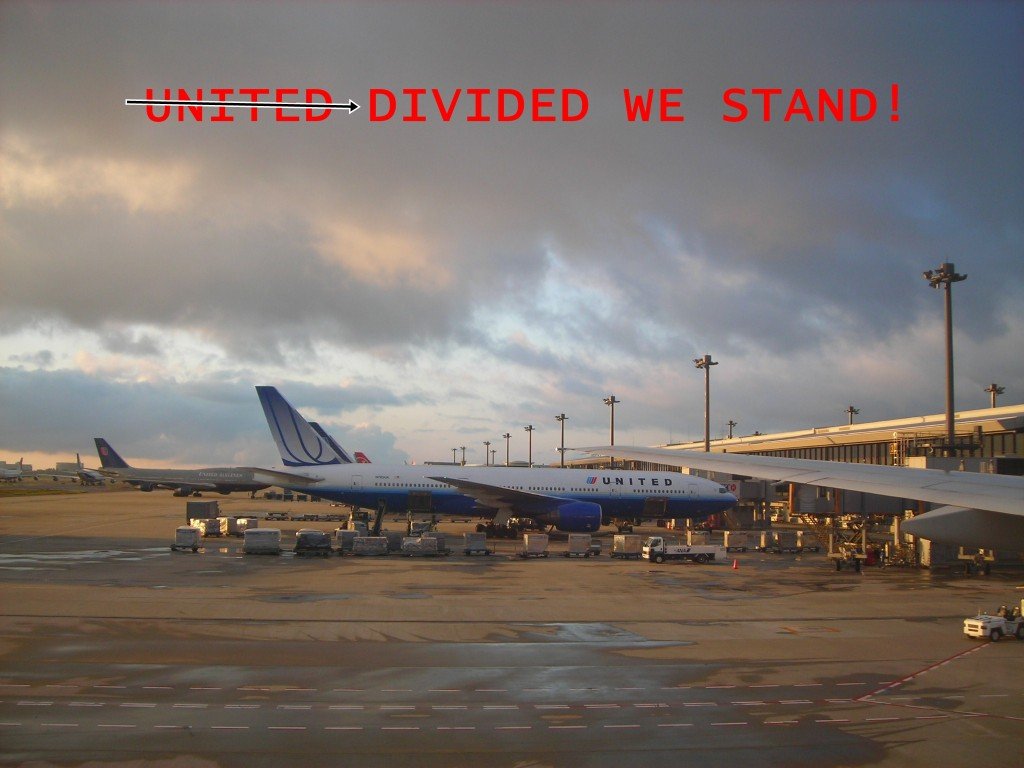 It’s  been a few days since United dropped a bomb on their unsuspecting customers in the middle of the night with their sudden and drastic MileagePlus devaluation. Smart move: history proves there is no better time for a good ambush than early morning.

After the initial outrage, things have mostly quieted down. One of the longest and most raging Flyertalk rants in the history of the forum is subsiding with every passing moment. #Unitedunfriendly hashtag that trended like crazy last Friday and Saturday is for all intents and purposes dead. Most people have moved on, provING two indisputable facts: that Mr. Smisek and Co. are still smarter than all of us knuckleheads, and that a few-day-cooling period means eternity in the internet time units. It appears that our collective resolve as well as our attention span are nothing to write home about, after all.

The fact is, most MileagePlus members don’t give a passing thought about the program’s legs being cut below the knees. The absolute majority of people fly coach anyway, and Mr. Smisek had enough common sense not to touch coach. Well, almost not to touch, save some routes. This is what you do in this business: you hit the tiny but most vulnerable part of your customer base, those who have tried better things, like F on Lufthansa and Singapore, and tell them, look: thank you for your support over the years, but we can do without you now. We have the airline to run and money to save, and there is nothing you can do to hurt us. Sure you can run away and cry on the American’s shoulder, but when they repeat the same thing we did, you will be back. So go ahead, bitch all you want about it. That won’t change a thing.

In the meantime, every Tom, Dick, and Harry can’t, for the life of them, comprehend what the ruckus was all about in the first place. It still costs 25,000 miles to visit aunt Millie, right?

And thus, more and more bloggers and travelers alike state the obvious.

I have a confession to make. I’m this kind of person, too. I won’t throw away a first class seat, but I don’t mind coach, at all. I’m all about getting to the point B. And I sure as hell wouldn’t have a problem flying on United metal if I didn’t have access to their partners. First, business, or coach—anything will do, because staying home is not an option for this junkie. I would fly in the back of the plane, in the last row, or even the lavatory, if I had to! Anything to get to that mysterious point B. Anything!

The problem is, however–and this is something most people are completely missing right now–that this devaluation goes beyond and above what meets the eye. If we forget about this silly class warfare (pun intended), the implications of the United’s Black Friday are much worse and more far-reaching than simply denying the “fancy-pants” their free F-ticket on Singapore.

Here is what’s going to happen on international flights. Mark my words.

Those of you who think it won’t happen because, there are oh so many more seats in the back than the front, forget one thing. Most folks already fly economy. They have never even thought about anything else. The influx of former premium award flyers, who can’t afford them anymore will strain the system, and I predict (sorry I have to do this in this overly dramatic fashion) that come June 2014, finding availability on popular routes with MileagePlus will become as difficult as finding an award seat with American right now.

It will be hard in every class of service: coach, business, and first.

And what happens a couple of years down the road after/if the AA-US merger gets approved? You tell me.

Disagree about my June prediction? Say when. Oh, wait, also say why, while you’re at it.

[…] Fantastic rant against United by Andy Shurman at the Lazy Traveler’s Handbook: United…NO, Divided We Stand […]

I think the biggest hindrance is going to be an improving economy and more seats being sold. With these changes United will lose the gamers and schemers as they will move on to green pastures, there might be short burst from these people but then it will settle. But as long as United maintains capacity discipline and more people buy tickets it will be difficult to find tickets. Another factor is that most economy class tickets on partners did not increase either so again majority will still have a good chance of picking them up as well.

I agree but to the point. I’m afraid we’ll soon realize that even economy awards might become difficult to redeem. Unfortunately, we have no options but wait and see what happens and adjust our game plan accordingly.

Sorry for not approving your message earlier; for some reason, I fished it out of spam folder, which is strange. Welcome!