Cathay Pacific, Japan Airlines, Qatar… Think Airlines Award Charts Can Only Get Worse? You’re Wrong, There Is an Airline That’s Made It Better!

Devaluation of airline miles programs is a fact of life, but it’s funny how things are always learned in context. The digital ink hasn’t dried on the brutal Cathay Pacific devaluation, as yet another airline hit its members in the mug. Although hit is the wrong word. It went something like this…

In black trunks — your Privilege Club members, ladies and gentlemen.

That was a good one, though, right?

You gotta give it to Qatar Airways. They are bold. Their new Business Class is bold. Their lounge design is bold. But most of all, it’s their statements that are bolder than bold. Qatar’s CEO, I believe, once said that his Economy cabin was so good that he didn’t need Premium Economy. Never mind that Qatar’s 777s pack sardines people 10 across.

However, nothing Qatar had ever done before was as bold as the last week no-advance-notice, insane, draconian devaluation. As if by a snap of the fingers, an economy seat from New York to Doha overnight went up from 35,000 to 50,750 miles, and Business Class from 70,000 to 101,500 – a 45% increase! That’s beyond bold. That’s I-can-do-whatever bold. That’s I-don’t-give-a-s^*’ bold. That’s go-f^*’-yourself bold. In fact, if I were to define Qatar’s boldness the way marketers come up with names for paint colors, I’d call it thuggish bold. It has almost the same beat as Vegas Gold (real color, btw), but with a pinch of dickishness. Kudos to your boldness, Qatar. Good thing your Privilege Club had never been anything to write home about to begin with.

After Qatar’s massacre devaluation, I’m prepared to walk back my anger toward Cathay Pacific, which – let’s be honest – has devalued its Business Class awards quite badly, but, like a decent airline should, gave us time until June 22 to redeem.

Then how do I feel toward Japan Airways? Well, I feel grateful. I know – ridiculous, right? Allow me to explain.

No, the Japan Airlines devaluation is no small matter. The new JMB Partner chart is going to be considerably worse, especially for North American travelers (it’s not surprising, really, that we are targeted in every devaluation). Some awards will go up 30% like Business Class in the 14,000 to 20,000 miles band – the band we would use for traveling between North America and Asia. 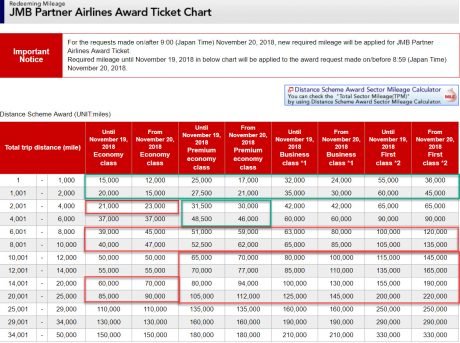 However, consider these facts.

FINNAIR Surprise (with a catch)

How do you feel when you receive an email titled like this?

WE ARE LOWERING OUR FINNAIR AWARD FLIGHT PRICES

Not “enhancing,” the word that makes me want to puke every time I see it, but “lowering”?

Don’t you get excited?

I do. Not because I have Finnair points (I don’t), and not because they are easy to get (they aren’t), but because someone somewhere has finally decided to do right by us, LOL.

Today is the day!

Of course, there is a catch — isn’t there always?

Finnair is eliminating the  Finnair Plus Junior discount. Children between 2 and 17 used to get 50% award redemption discount on round-trip flights. That’s gone.

Adult flyers and travelers with a family of 3 will still win under the new rules. Finnair Plus members with 2 kids or more will lose. 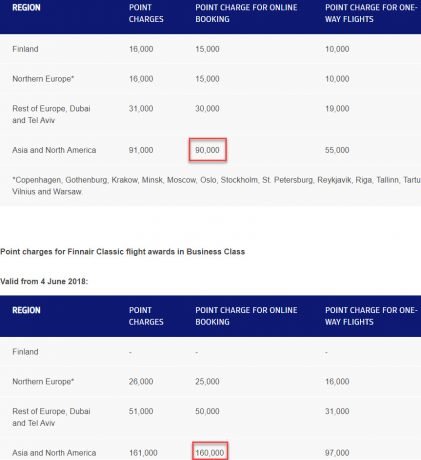 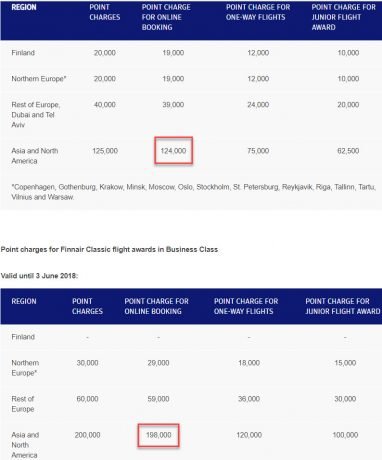 If these levels still look ridiculous to you compared to even U.S. based programs like American, Delta, or United, that’s because FINNAIR points are not miles (although can you really call U.S. miles “miles” after the transitioning to revenue-based models?). FINNAIR’s earning rates seemed to be usually better than, say, American’s that pay a non-elite member 5 miles per $1 spend. FINNAIR pays at least 4,000 points for the cheapest ticket in Economy on a transatlantic route.

Case in point: this ticket booked in N on FINNAIR metal would earn you 8,000 points with Finnair vs. 3,565 miles with American (taxes and government-imposed fees are excluded from earning).

FINNAIR Plus seems to have more generous earning rates than AAdvantage

Of course, this is only one example, and, quite honestly, I don’t know if it’s typical or not. It looks it, at least for regular economy. Finnair adds fuel surcharges and has no transfer partners or ways to earn points outside of actually flying, AFAIK, so digging too deep into the program I have no interest in would be counterproductive.

So, yes, devaluation of airline miles programs and loyalty programs in general is truly a fact of life. But I just wanted to show you a real and true unicorn – a frequent flyer program that – in this day and age – has actually improved its redemption side, so KUDOS to FINNAIR — even with a catch.