Delta SkyMiles 2015: Agonized, Tantalized and Analyzed Part One — What You Really Need to Know!

Sorry for a silly title, but there is truth to it. Anyone who had tried to book a Delta SkyMiles award before they finally made those long coveted changes to the calendar, will agree with the first two adjectives! For many years, the Delta SkyMiles award calendar had been a source of immense misery for millions of flyers and the matter of immense pride and joy for those super hackers who thrive in riddles wrapped in mysteries, hidden inside multiple layers of enigma-like code that was written with one purpose in mind: TO PREVENT THE CALENDAR FROM WORKING! In other words, you had to know how to approach the Delta Skymiles award calendar and how to avoid rubbing it the wrong way–otherwise after many, many hours of  trying to make sense of it, you had to ask yourself the same question over and over again: what terrible things you had done in your life to deserve this torment!

The Delta Skymiles has not just become better. It has become inherently better. First, they made the calendar work for normal people and loaded a lot of availability that hadn’t been there before. And now, they promptly set it up for one-way travel. From what I’ve read on Twitter, they made it work at the stroke of midnight yesterday. Wow!

In this post, I am not going to touch on the earning part of SkyMiles reform. Everyone knows they’ve gone revenue-based, and that it is not going to be good for most people. So to all loyal Delta flyers or flyers who can do nothing about it–you have my sympathies. I am, however, going to focus on the redemption part of the new Delta SkyMiles program, and from that point of view, the changes have been overwhelmingly positive so far (at least, this is how I feel about it).

1. Delta has greatly simplified and streamlined the SkyMiles calendar. I would have to say, that the calendar’s interface is now better than American’s but maybe not as good as United’s.

The first screen hasn’t changed; you can go for advanced search if you want a business class seat or/and flexible days availability. 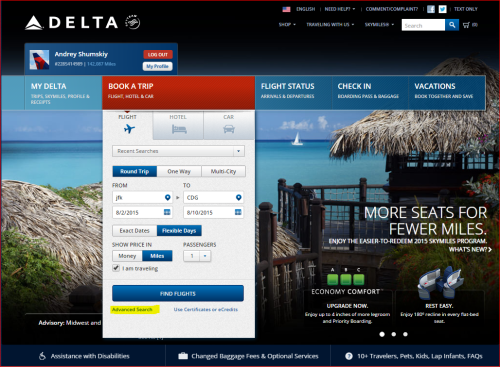 The next screen is all the beauty. You can choose one way or roundtrip, flexible days or a 5-week calendar, class of service and nonstop flights. 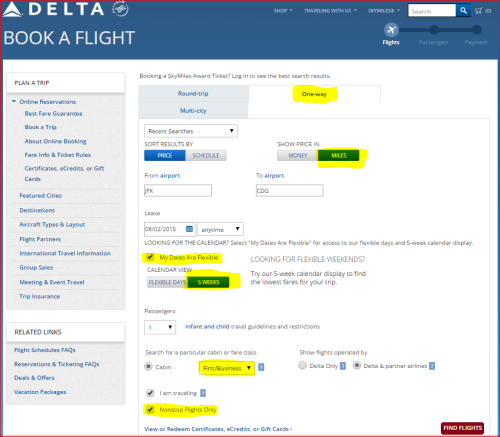 The next screen shows you available flights, and you can continue tweaking the same values from there. It’s fast and efficient. 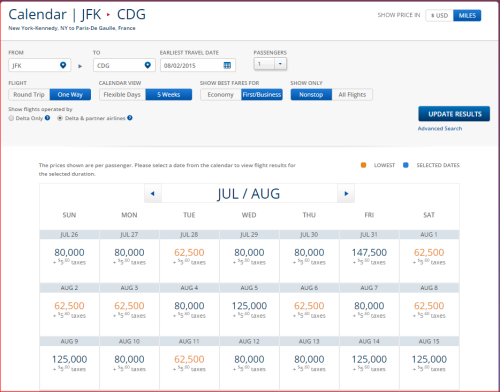 2. Availability has become much better on many routes. We will talk about it in great detail  in my next installment. I have checked international business class availability from all Delta US hubs and found them better than what I had seen a few months ago. There is a lot of availability to Europe, and great availability to Australia and New Zealand–and on V Australia, no less!

3. New partners are available for booking on the Delta Skymiles website, such as China Eastern and China Southern, and perhaps some others (too early to tell).

1. Remember these stopovers on the roundtrip flights that you used to be able to book even domestically? They are gone. No more stopovers with Delta! American Airlines, if you remember, did it in two sweeps. First, they eliminated international stopovers, and then, the rest of stopovers in gateway cities. Delta has decided not to bother and killed all stopovers at once.

2. There are still bugs in the Delta Skymiles calendar. Sometimes, they would just decide that they don’t fly to your city. I haven’t been able to find any system or reason to that; it just happens. Take a look. 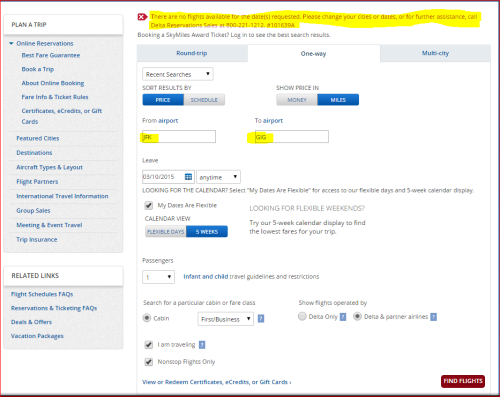 Now, if I didn’t know that (oh, yes) Delta and her partners do fly to Rio de Janeiro, I might’ve just thrown my hands in the air. But I don’t like to take the first no for an answer. I know Delta flies to Rio out of Atlanta, and I know that Delta partner Aero Mexico flies to Rio out of Mexico City, so I tried to tweak with the dates and class of service, but to no avail. Then I went to the Chrome Incognito mode, launched the Delta website from there and did the search from the homepage. Lo and behold: 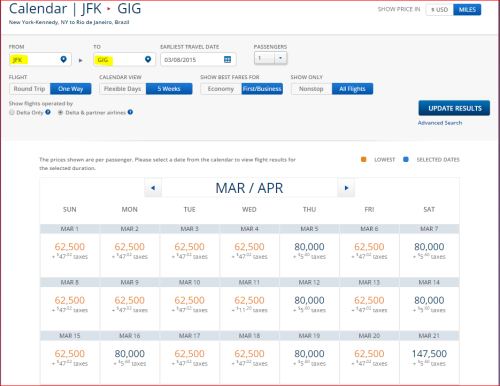 I have no idea why Delta throws fits like this sometimes, but it’s good to know there are workarounds, and they are not too difficult or time-consuming.

3. If you are piecing two one-way flights together between the US and Europe, do not take a Delta flight originated in Europe (HT to View from the Wing). Delta will sneak in a slimy international origination surcharge (I can only presume that so called fuel surcharges are not the rave they used to be, so Delta got creative).

Case in point. This is a one way award flight between Paris and New York. You will pay 264 euro for taxes and fees, about $320 for the privilege.

This is a roundtrip flight between New York and Paris. You will pay $137 total. 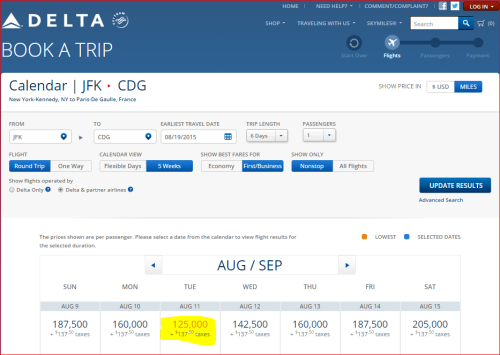 So, should you not be able to find a roundtrip on Delta, book a Delta flight from the US, and fly back on American or United.

To be continued: Delta SkyMiles 2015: Agonized, Tantalized and Analyzed — Part 2: Hub by Hub in Maps and Details

[…] Delta SkyMiles 2015: Agonized, Tantalized and Analyzed Part One  — What You Really Need to Kn…  –  The Lazy Traveler’s Handbook    Well, well, well. After promising to fix the award calendar back in 2008 (or was it 2010?), they finally got around to it. Welcome nevertheless but of course the price to pay is high with the loss of stopovers. And we don’t know all the shenanigans yet… […]

I'm Loving The Crappy 2014 Miles And Points – Chasing The Points

[…] Delta SkyMiles 2015: Agonized, Tantalized and Analyzed Part One You Really Need to Know! […]

[…] in January 2015, when I was writing my EPIC  3-part series on the new Delta SkyMiles program, I analyzed international Delta business class availability on a hub-to-hub basis. Why business? […]

[…] blog posts ever, as was the “Agonized, Tantalized and Analyzed” series (here are parts One, Two, and […]