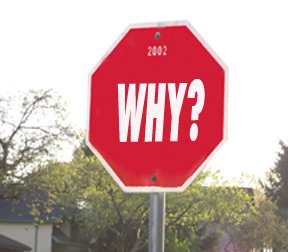 The New Delta Fuel Surcharge — No Rhyme or Reason

I’m not an aviation expert. But there are some things I think I know. I know that all airlines add the same government taxes and fees to their tickets. I know that SkyMiles is the sneakiest and most deceitful major frequent flyer program in the U.S. But I also know that there is no Delta fuel surcharge (oh, I’m sorry, “Carrier-Imposed International Surcharges”) on Delta’s own flights except those originating in Europe.

So imagine my surprise when I saw this, while digging around for my JetBlue Cuba post yesterday. 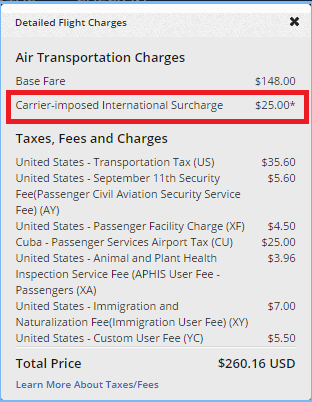 A fuel surcharge for the flight to Cuba? Really?

And it does the same thing on an award ticket, of course.

I quickly checked some nearby places Delta flies to from JFK other than Havana — Cancun, Santo Domingo, St. Thomas. Nope, no fuel surcharges. Phew!

Delta’s matching JetBlue fares from JFK to Havana to a T. But has Delta reworked the $25 Cuban Health Insurance fee, which is a legitimate fee, into a “surcharge?” Which is, you know, about as “legit” as it sounds.

It appears so. It doesn’t make any sense at all. And it’s far from harmless.

You might think it doesn’t make any difference because you have to pay for Cuban medical insurance one way or another. But you would be wrong.

Let’s compare the above itemized Delta’s tax bill to JetBlue’s once again.

All airlines pay the same taxes, do they not? We see the APHIX fee, the Customs fee, the Immigration and September 11 fees, we see the Cuban Airport Tax, and we see the Health Insurance fee as a separate and clearly stated item — the item, which Delta, in its infinite wisdom, apparently decided to obscure and call a “surcharge.” But for some reason, Delta’s taxes/fees outlay is $35 more than JetBlue’s? Why is that?

Does Delta really, REALLY, hate SkyMiles members so much?

Let’s examine this one line from the screenshot above.

Transportation tax on an award ticket?

By “Transportation Tax,” Delta means International Departure and Arrival Taxes. Each is $17.80, so it all fits, and, yes, they are legit taxes.

However, these taxes should not be added to free tickets. Unless Delta treats its $25 fuel surcharge (that shouldn’t be there in the first place) as a sole revenue component.

The idea of treating an artificial surcharge (which is, in reality, a government-imposed fee) as a revenue component is as absurd as it gets. We’re used to airlines sneaking in their own “surcharges” disguised as legitimate government fees and taxes to pad their bottom line rather than the other way around. As deceitful as it is, at least there is some logic to it.

JetBlue doesn’t add these taxes to an award ticket, even though it adds them to the revenue ticket.

United doesn’t add these taxes either.

United award redemption for a Cuba flight. No sign of the Transportation Tax

Even though it does add them to the revenue ticket, of course.

And Delta doesn’t add the International Departure and Arrival taxes to award tickets to other destinations like St. Marteen. 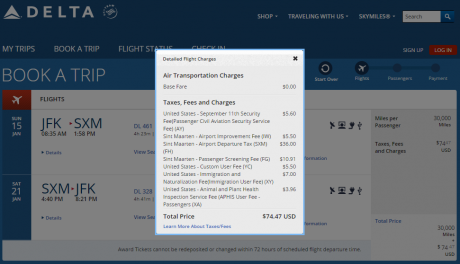 While it does adds them (and rightfully so) to a revenue ticket.

You must pay International Departure and Arrival taxes on a revenue flight.

Why is Delta doing that? Why not add the Cuban Health Coverage fee to the list of government fees and taxes like JetBlue, United and probably every other airline?

Because that’s exactly what it is — a Cuban government fee! Why call it a surcharge?

The Delta Fuel Surcharge is not a little thing

I don’t know what accounting game Delta is playing (and I doubt we ever will), but I hope it will come back to bite them. I’m going to file a complaint with DOT and encourage everyone to do the same. Here is why.

You might feel that $35 is nothing to worry about, but if my theory is correct and Delta is making us pay unnecessary taxes because it has, for whatever reason, instituted a “surcharge” in the Western Hemisphere to pay Cuba for health insurance coverage, this is a very troubling precedent. What other tricks can they come up with tomorrow to “enhance” their bookkeeping practices?

What do you think? Please tell me I’m overreacting.