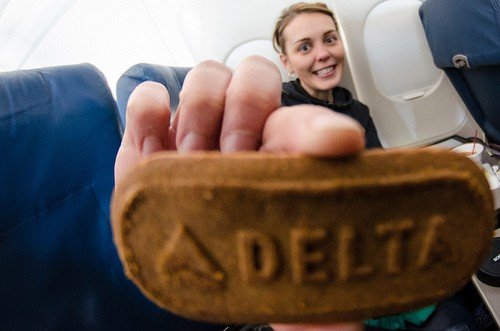 Everyone has gone ballistic on their latest shenanigans.

What makes most people fuming is one paragraph from the new Delta announcement:

We know your miles are important, so we want to provide the most notice possible regarding Award price changes. For travel on or after June 1, 2016, the number of miles needed will change based on destination, demand and other considerations. But most Award prices will remain unchanged.

Since, as of today, 7/17/15, we are able to book the flights for up to 6/12/16, many bloggers believe this means immediate devaluation. Over and over again, there are calls to dump whatever miles we might have and be done with SkyMiles for good. Mattew from Upgrade’s live and let’s fly took it farther than anyone, I think:

Delta announced an immediate devaluation of its Skymiles program on the redemption side this week effective for flights on or after 01 June 2016. We are now seeing just how draconian these changes are. Folks, this is a devaluation unlike any we have ever seen.

Really? Because I’ve seen some really bad shit from United and Delta. Is this latest development really that awful?

The truth is I have no idea. And neither does Mattew. And neither does Gary, who has dedicated not one, but two posts to this “apocalyptic” event. But it surely doesn’t look as bad to me as what Delta did in 2013 (remember that double-dip devaluation?). “Devaluation unlike any we have ever seen”? I don’t think so.

NOTHING HAS HAPPENED JUST YET!

I understand that most folks in the hobby hate Delta SkyMiles by default and expect only the worst from them. They are not off. The history of SkyMiles is a history of deceit and omissions by design. And the removal of the award chart? That’s pretty low, I’d say.

However, even at the risk of losing my credibility with my fellow hobbyists, I have to insist that nothing has happened.

Now, by saying that nothing has happened yet, I’m talking about relevant things. Because I really don’t give a flying duck about Delta increasing their highest 5th tier award redemption chart. Although, what chart?

Matthew from Upgrade is upset that…

We are seeing this on routes to Sydney, Dubai, Johannesburg, Hong Kong, and a handful of other popular Delta longhaul destinations.

What he refers, for example, is a flight from Sydney to some (unknown to me) city in the U.S., which is not LA because, guess what, availability between LA and Sydney is actually great. Regardless, he’s right. If we take a look at flights between Sydney and New York, for example, the things are bleak indeed. Up until June 1, you can see the flights in the 117K-175K range, while after June 1, most flights would cost you 375K, often a 3x increase. 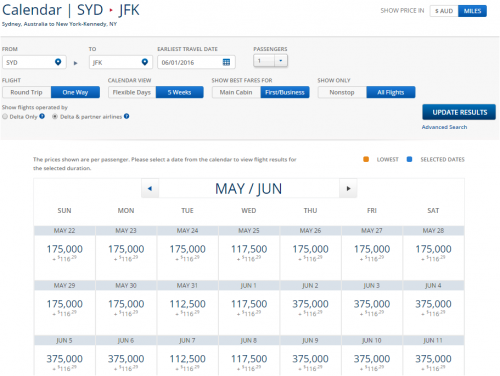 The post from View from the Wing echoes the same sentiment.

According to Delta’s 5-tier award chart that went into effect January 1, the most expensive roundtrip award in the SkyMiles system was supposed to be 350,000 miles.

That promise — as expensive as it was — is now out the window entirely. And I do mean entirely.

OK, I’ll take Gary’s word for it and presume that his search between Brisbane and Los Angeles was indeed random, and not just an attempt to illustrate his preconceived notion. So what are his findings?

He found that Delta would charge him (well, not him, because he knows better) 830,000 miles for this trip. Why?

Since Delta doesn’t include saver award seats in when you’re booking an award at a level higher than saver, they charge you additively. Since you can only have partner awards at level 1 prices, if you book Delta at anything other than level 1 you pay extra for the connection on a partner airline.

And This Is Where I Lost Him. Like Totally!

A one-way award flight between North America and Australia is supposed to cost 80,000 SkyMiles, period! If it’s more, it’s already a rip off.

It doesn’t matter how much more, 95K, 300K, or 700,000+ more. If you know what’s good for you, you will ignore anything that goes beyond the Saver rate altogether. At least, anything that goes much beyond that rate. If we are talking about 5-20K extra miles, you have my blessing.

So every time you begin seriously considering any level “Other Than Saver”, you are kidding yourself. Pay cash, fly coach.

Or Try to Remember This!

You are not married to one airline, one program, one airport, or even one city. If Mattew’s or Gary’s city pairs want you to pay 750,000+ miles, then do a smart thing and move your cursor slightly. And because you’re smart, you will find other programs or other cities, where Saver availability might be a bit better! How much better? This much better! 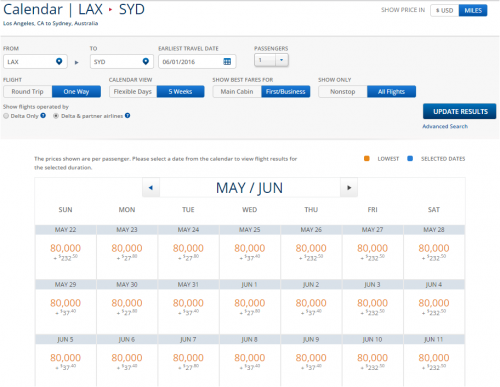 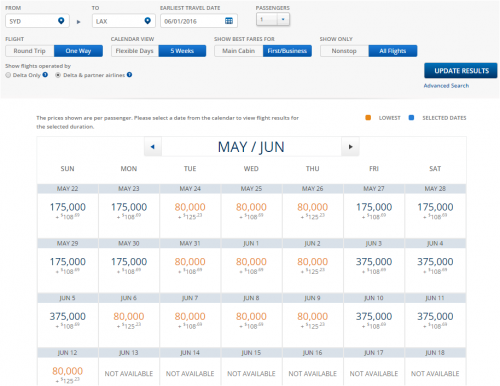 But what if you really need to go to Brisbane? Well, first of all, um, why? And second, let me reiterate that you are not married to one frequent flyer program.  A Quantas roundtrip flight between Brisbane and Sydney will set you back 9,000 British Airways Avios. 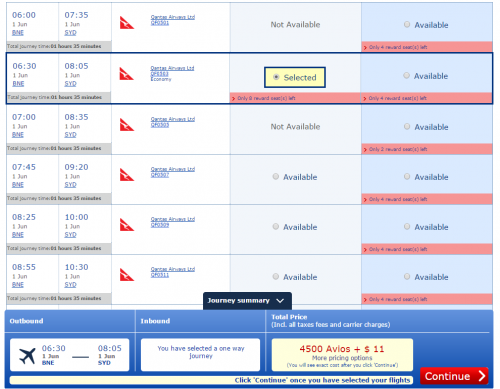 But what if you need to get to LA first? Well, yes, finding a Delta Business Class Saver award to Australia from Anywhere, USA can be tricky, although it has nothing to do with the devaluation. So you’d better find your way to LA first. Which might or might not be tricky from where you live. 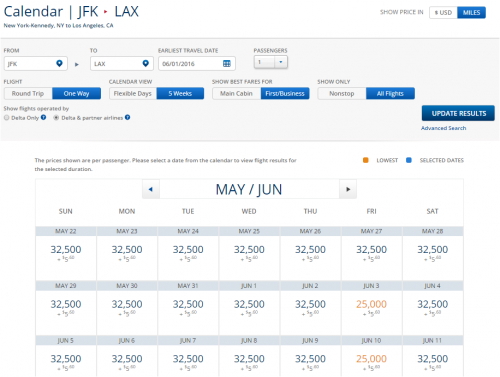 But you might find that it’s much less tricky if you don’t mind suffering a little bit in coach on the way to LA. 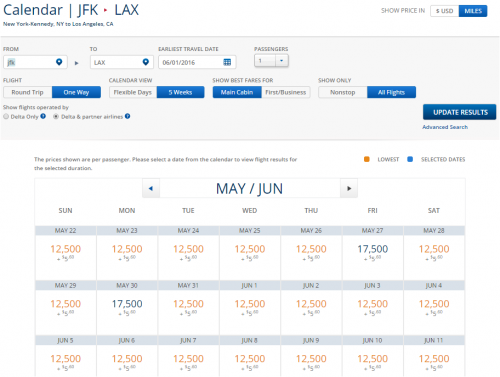 While the Delta website will likely error out when you try to build a multy-city itinerary (JFK-LAX-SYD), you can still call them and have them add it manually. Yes, it can take more than one call, and they will still price the whole trip in business. Nothing we can do about that.

The point is that poking around their new “dynamic prices” is nothing but an intellectual exercise. It has no practical meaning. If you wouldn’t buy a ticket for 175,000 miles, you don’t care if they raise it to 350,000 or to 1,000,000 miles for that matter!

But Everyone Knows They Can’t Be Trusted, Right?

I don’t know, Slick. It looks to me as if they have been honest for the last 6 months.

OK, OK, just lower that pitchfork. I feel your pain. Believe me, I do!

If you think for a moment that I’m a Delta fanboy, please think again!

I remember the anguish of trying to stitch together an award in their pre-2016 calendar. A part of me died every time I opened that atrocious page.

I remember the torturous hours of my life spent on the phone with Delta agents, trying to book the award (that I had miraculously managed to find) that the agents, for whatever f%^&ing reason couldn’t see on their computers.

No one will ever give me these hours back. Ever!

Delta was an inspirational source for several of my posts, including my most popular post ever:

Now, since I’ve suffered for my soup, I think I’ve deserved the right to state the following. Right now, Delta SkyMiles is the best U.S. airline program for international business class travel.

Is their new award calendar perfect?

Hell no! But it is workable and in most cases, accurate. So far, I have been able to book all my tickets without a hitch.

Do they have best Business Class award levels?

Hell, no! But they are still much better than United partners, and their availability is unmatched.

Did they make good on their promises?

So How “Useless” Are Sky Pesos Anyway?

Back in January 2015, when I was writing my EPIC  3-part series on the new Delta SkyMiles program, I analyzed international Delta business class availability on a hub-to-hub basis. Why business? First, because Delta was always stingy with business class redemptions, so it would make a good comparison; second, because Delta Business Elite international class is really good; and third…

Well, look for yourself.

These are all Delta destinations in Europe from JFK.

Back then, there was excellent non-stop business class award availability in the summer 2015 for two people in both directions to the following cities:

There was good availability for two people in both directions to the following cities:

Fast-forward to now. Yes, we can’t make an apple-to-apple comparison, because we are looking too far in advance. But in any case, here is a breakdown for Business Class availability for at least two people. And some of these flights have availability for as many as 4 passengers!

One change that I have noticed, is that there are fewer flights available on Delta than before, but there seems to be much better availability for connecting flights with one or more segments flown on partners. Anyway, the top destinations that had excellent availability back then, still do. 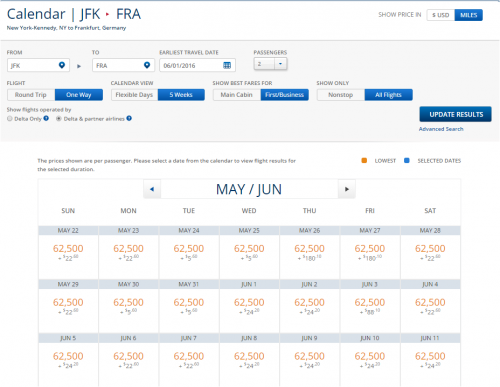 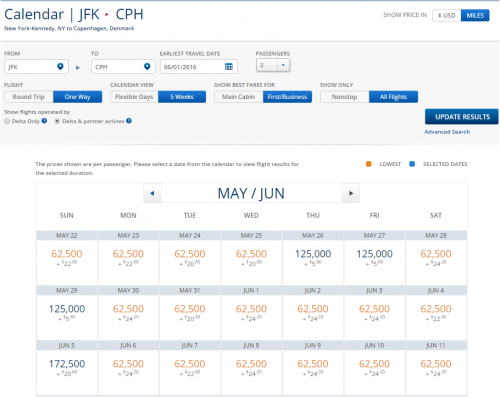 There was limited availability for two people in both directions. Now it’s excellent, except Dublin. 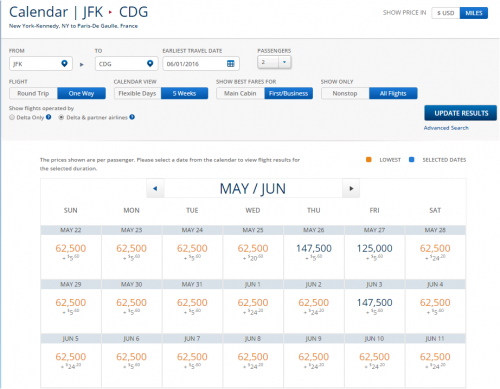 There was no availability for two people in both directions. Now it’s excellent.

heads up
typo, Headline “Eveyone” should be “Everyone”

Thanks, corrected. My proofing system is not there yet, but I’m trying. 🙂