Delta Devaluation 2016: Book an Award Flight to India Before It’s Too Late 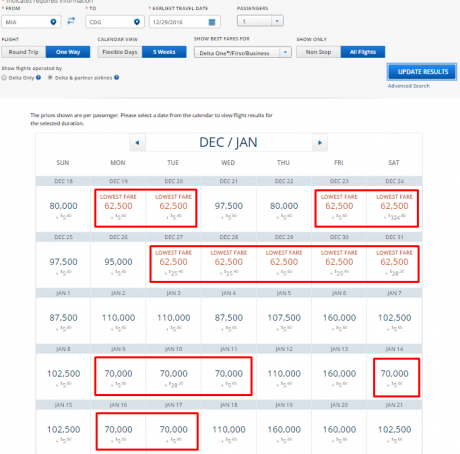 Let me get this off my chest first

Delta SkyMiles is the most dishonest and unethical major U.S. frequent flyer program. Always has been and probably always will.

As a reminder, Delta doesn’t announce award changes anymore. They just change the redemption levels after a certain date. As a result, you don’t have a chance to book your travel at an old rate. Delta’s recent 12% increase of a business class award to Europe from 62.5K to 70K miles has become the latest offence in its unrelenting war against SkyMiles members.

In the past, I have ridiculed and defended Delta almost at the same time. The bits about coke and weed in Delta’s HQ was one of my most popular blog posts ever, as was the “Agonized, Tantalized and Analyzed” series (here are parts One, Two, and Three).

But that’s in the past. Removing the award chart and devaluing the redemption levels without warning are the worst possible transgressions for a loyalty program. Nothing comes even close to the Delta Devaluation 2016.

No wait, scratch that! Claiming that’s it’s “illegal” to warn members about devaluations tops everything else. So that’s that.

Look, devaluations are inevitable, and there are very few people who don’t understand that. We can hate excessive devaluations (and we do!) , but we know why they happen. Delta’s mode of devaluations is something else. Sneaky, arrogant and underhanded would just begin to describe it!

Is Delta better than everyone?

No. Probably not. I haven’t flown with Delta for about a year, and my last flight was in business from Reykjavik to JFK. It was OK. The crew was friendly, and the food was fine. The seats were domestic first, but it’s a short flight anyway.

However, would I have been any less satisfied if I had flown on the same route with American or United. I doubt it. I’ve flown business class with both, and they were fine, too. Not spectacular, but fine. Just like Delta.

There is an old Middle Eastern proverb: “Saying halva-halva won’t make your mouth sweet.” Delta marketeers know this is not true. Just keep repeating “Delta-Delta” and people might turn into believers. Many have.

It is probably true that operationally Delta is marginally better, and it’s certainly true that 9 across on a 777 is always better than 10, but that doesn’t mean that your personal experience on Delta’s other planes would be any different from AA or United. Me? In coach, I’ll take JetBlue over any legacy in a heartbeat!

Skytrax seems to support my stance. It gives 3 stars to all three: AA, Delta and United.  Interestingly, JetBlue gets 4.

If you have any interest in keeping FF programs less dishonest, stop supporting Delta

Devalues on October 1, 2016. All flights are business class, one way from North America

I created a table for the Third Part of my  Agonized, Tantalized and Analyzed series to show how the Delta levels would stack against the competition. Little did I know back then…

This table is for business class redemptions in thousands (70 is 70,000 miles). Do note that the region definitions differ somewhat between the airlines.

Here are region definitions for Delta, American, and United. I’m reprinting them from my older post just so you have all the info in the same place.

Not all destinations belong to the same region as far as different airlines are concerned. Here are a few examples:

But it will. You don’t think Delta is going to keep Europe and India at the same 70,000-mile level, do you? While paying 70,000 miles for a business class flight to India, especially with fuel surcharges, is not a bargain at all, it’s still a decent redemption that costs the same as with American and can be a better deal than United. This is the last decent business class level that the good folks at SkyMiles will increase really soon … any day now.

So if you want to maximize your Delta redemption and are interested in India (or the Maldives, Nepal, Sri Lanka or other Indian Subcontinent countries) don’t delay and book now. Because no one really knows when it’s going to be too late. 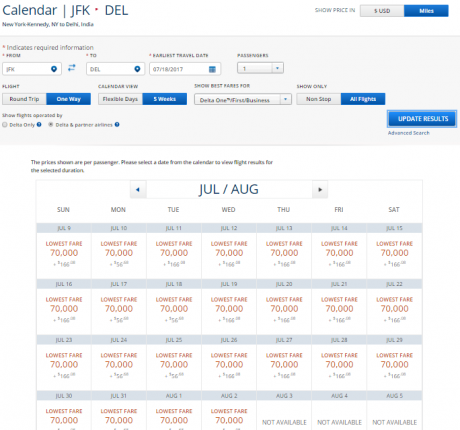 I snapped this end-of-schedule screenshot with a purpose. Today is September 5 and a business class flight to India still costs 70,000 miles well into the next summer. How long is it going to last? What’s your bet?

[…] Lazy Traveler Andy does not play around with his words on Delta and tells you to book an award to India before it is too late! The post also has a great table comparing Business Class awards between the three remaining legacy […]