Per Frequent Flyer, Club Carlson is taking away the most valuable benefit for elite members–the Bonus Award Night. As of right now you get the second night free when you book two nights or more. If you have a partner, you can apply for two US Bank Club Carlson credit cards and use the BOGO feature indefinitely. This is coming to the end on May 28th. The sneaky way that the US Bank has decided to notify their members — in their credit card statement, no less — is even more troubling.

There are two sensible benefits left. The first is 40,000 points annually upon renewal. The second is an automatic upgrade based on availability. Club Carlson upgrades are hit and miss, in my experience. There is no free breakfast for Gold members, and removing BOGO makes this status mediocre at best.

The BOGO feature is going to be replaced by a free bonus night after spending $10,000. This is in line with some other hotel programs, which just reinforces what I’ve said before: mediocrity. There is nothing to be excited about anymore.

The annual fee for the card is $75 ($60 for the business card). I intend to book as many stays as I can using a free second night by My 28th, and will cancel both cards — my business card and the one for my wife — when the annual fees are due. I have been able to get some great deals out of the Club Carlson cards a couple of times, but their limited footprint means either they don’t have the properties where I go, or that I can usually find better deals with other chains. However, if you frequent or can find a good use for categories 1 and 2 hotels, then the 40,000 bonus points annually are not shabby at all!

They Are Not Handling It Right! 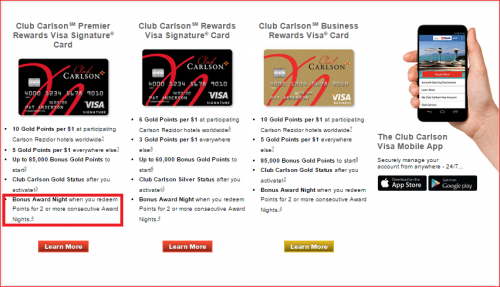 The Club Carlson devaluation is not the first, and it won’t be the last. We might hate it all we want, but loyalty program devaluations are a fact of life. However, a stealthy way Club Carlson has “announced” this devaluation, leaves a bitter taste in my mouth. This is a crucial change to the program, and they should have communicated it clearly via email and snail mail rather than sneakily add a little paragraph to the credit card statement. Astonishingly, they still advertise the BOGO benefit in their credit card ads! I can allow that this is an oversight and not an attempt to intentionally mislead customers into applying for more cards before the show is over, but what a terrible way for Club Carlson to handle such a massive devaluation!

Miles and Points Good Stuff Weekly… Not So Good, Too! | The Lazy Traveler's Handbook

[…] worse, they tried to hide it, by burying the announcement in the fine print of your credit card statement. After they […]