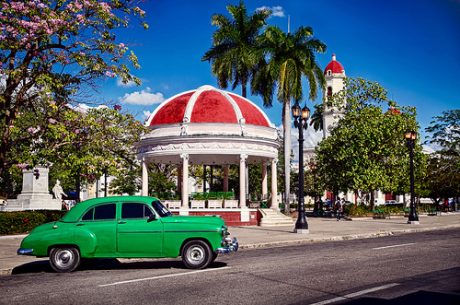 A ruthless and cunning dictator.

A gifted orator who put his nation on a meatless diet and convinced them that the only choice they had was socialism or death.

A survivor of numerous assassination attempts, several U.S. presidents, his own cigars, and persistent rumors of his imminent death – for the last 10 years, at least.

A man who almost started World War III; who asked Russia to nuke America; and who was willing to sacrifice Cuba and the Cubans to teach the “imperialists” a lesson. The man Khrushchev called a lunatic – Khrushchev who banged his shoe in the United Nations. It takes one to know one. Waa

A man whose world prominence was ridiculously disproportionate to his tiny, economically insignificant island, and who, nevertheless, became a household name for hundreds of millions of people, from the Americas to Africa and beyond.

So why this editorial? I don’t write editorials. I didn’t write one even when an orange buffoon won the hearts and minds of America’s heartland.

It’s just … well, he died in the middle of my research. What am I supposed to do? Ignore it?

Keep reading even if you hate editorials and I promise I’ll make it worth your while.

I think Cuba is going to change now and fast.

I say, get there sooner rather than later.

His brother Raul is old, and he has perhaps 1/100th of Fidel’s charisma and that’s on a good day. “Socialism or Death” should be dead soon enough. Expect a huge influx of capital, lots of Burger Kings, and condo developments. Expect huge and rapid changes, some good, other less so. Expect higher crime rates. Expect friendly Cubans becoming less friendly and more corrupt. Expect less and less authenticity with every passing year.

The changes will hopefully be good for most people, but not everything that’s good for the people is good for travelers. I know it sounds somewhat cynical, as people who can’t afford to buy beef could use a few Burger Kings. In the grand scheme of things, the proliferation of freaking Burger Kings and KFCs is good. I’m all for Burger Kings, but they would be terribly out of place in old Havana, I think.

Seriously, get to Cuba now. I’m thinking about squeezing in a short trip sometime in February, as I have an abundance of travel plans in the first quarter of 2017.

AFAIK, there are no chain hotels in Cuba yet to use your points, but flying to Cuba is cheap and easy, especially from the East Coast.

Here is the post on travel to Cuba I wrote 3 months ago: New Fantastic Way to Redeem JetBlue Points at 2 Pennies. It already was good, but things have gotten so much better since then! 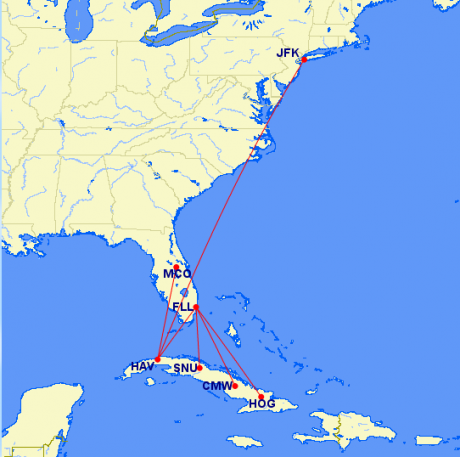 How to redeem JetBlue points at 2.2X for flights to Cuba

When I wrote that article above, JetBlue didn’t have flights to Havana yet, but it does now. And today it launches the one from New York.

This is already an excellent price, but TrueBlue points make it even better.

Or Pay 7,000 Points for JFK to Havana Round Trip

Being a revenue-based scheme, the JetBlue program rarely offers a ratio better than 1.7X or 1.8X on a point.

How to redeem JetBlue points at 4.4X for flying to Cuba

Want to do even better? It’s easy. Here is a revenue flight to Cuba, priced at $140.

$140 Fort Lauderdale to Havana Round Trip

But no matter how cheap it is, booking it with TrueBlue points is better.

Or Pay 2,100 Points for Fort Lauderdale to Havana Round Trip

This gets you a 4.4X value. Yes, on a revenue-based program.

At this point you might be thinking, OK, it can’t get any better than this. Well, you’re wrong.

How to redeem JetBlue points at 12X for flying to Cuba

Fly from Fort Lauderdale to Santa Clara for $120 all in. It’s so cheap already, should you even bother with points?

You might if you can get the same flight for only 600 points plus taxes.

How to redeem JetBlue points at 33X for flying to Cuba

$114 Orlando to Havana Round Trip

200 Points plus $47 Orlando to Havana Round Trip

$114 FLL to Holguin Round Trip

$114 FLL to Camaguey Round Trip

If you didn’t whip out your calculator just yet, don’t bother. It’s 33.5X on a point after we deduct the taxes.

The lowest rates are for January and February

If it’s not a glitch, I’ve never seen anything like it. Looks like a mammoth unadvertised Black Friday award sale. Or Cyber Monday. If so it will be dead today. Too bad it’s not scalable, although still might be perfect  for a big family or repeated visits. At these levels, you could do a few speculative bookings. Who cares if it doesn’t pan out?

Can it be a glitch? It certainly can, but I don’t think so. I’ve gotten all the way to the payment page, and JetBlue never blinked.

It seems the demand isn’t there yet, and every airline that rushed in — Delta, American, Spirit, Southwest, JetBlue don’t know what to do with the capacity. Check out Delta fares from JFK that completely match JetBlue. 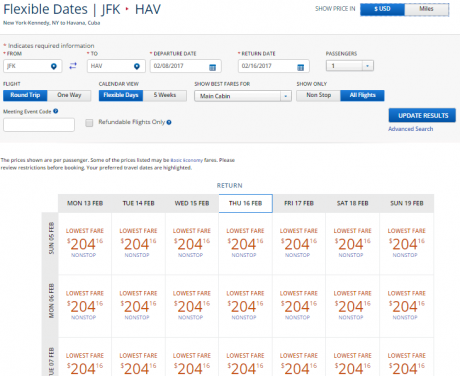 But try to get there on SkyMiles, and it’s business as usual. 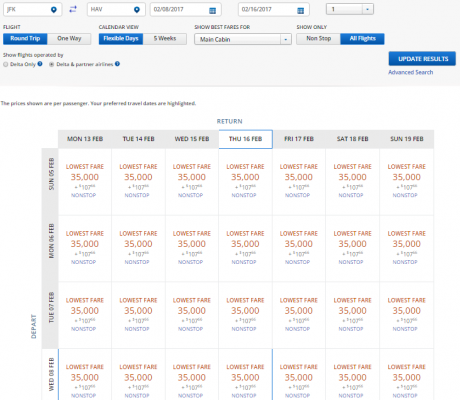 Just to think that a 1.5 flight between Cuba and Florida cost $800 a year ago. Amazing!

Can Anyone Really Go to Cuba?

In theory, no. There is still a list of qualifications, but in reality I simply can’t imagine how any American wouldn’t qualify if they read this list carefully. Seriously, if you could show me someone who absolutely couldn’t qualify under one of these categories, I’d be surprised.

How to get JetBlue Points

Even if you don’t have JetBlue points, the chances are, you do.

American Express Membership Rewards and Citi ThankYou let you transfer points to the TrueBlue program at a 1:0.5 and 1:0.8 ratios respectively.

Even though it is not usually a good deal to transfer points to a revenue-based program, it might be for the flights to Cuba. It would cost you 300 to 14,000 MR or TU points to fly round trip to Havana from the East Coast. I say, it’s a gift.

There are three Barclaycard JetBlue credit cards. I can’t recommend the one with no annual fee due to its weak benefits, but the Plus cards give you 30,000 points each. Note that I will make a small commission if you apply for the JetBlue Plus Personal Card (still the highest bonus available), and I appreciate your support.

One of the most important features that makes these cards even more valiable is Family Pooling. Basically you can get 120,000 points in sign up bonuses alone if you apply for both cards with your “spartner.”

I’m thinking about squeezing a trip sometime in February, as I have an abundance of travel plans in the first quarter of 2017. What about you? What do you think about traveling to Cuba? Yes, no, maybe? Share with the class.