Business Class to Australia / New Zealand for 120,000 Miles Round Trip! 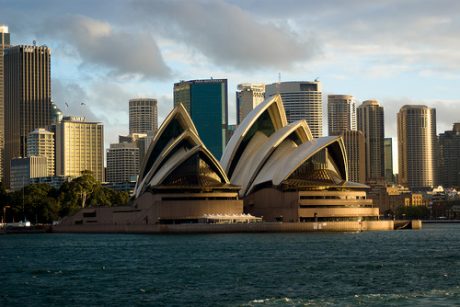 Below is availability for 2 passengers for flights to Sydney from Houston.

And from San Francisco

Now, you can book this flight for 80,000 United MileagePlus miles one way, but United miles are not easy to get by. Instead you can use only 120,000 ANA miles with ZERO fuel surcharges. ANA is an American Express Membership Rewards airline partner, and I’m a huge fan of the airline and its Mileage Club program, as you may well be aware.

As a reminder, you can’t book one-way travel with ANA miles, but the good news is that there is a great award space for tickets from Australia, too, especially to LA and Houston (but not San Francisco, unfortunately). So you shouldn’t have a problem with a round trip anyway.

From Sydney to Houston

And from Sydney to Los Angeles

I’ve tested several dates on the ANA site, and all of them worked for me, so it’s not phantom availability — but, as always, YMMV. Note that the price below is for 2 people. 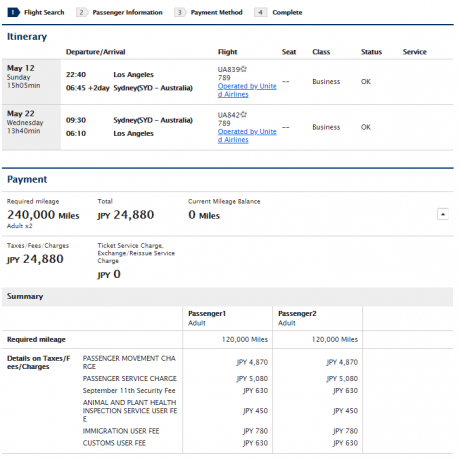 Business Class to Australia and New Zealand — A “Betterer” Way

United flies between San Francisco and Auckland, New Zealand 3 times a week, and while the Business Class award space from Sydney to SFO is abysmal, it’s quite good from Auckland.

Since ANA allows a free stopover and up to 2 open jaws on its award ticket, you can do this:

From Los Angeles to Sydney to Auckland to San Francisco: for 120,000 miles! The price shown is for 2 people. 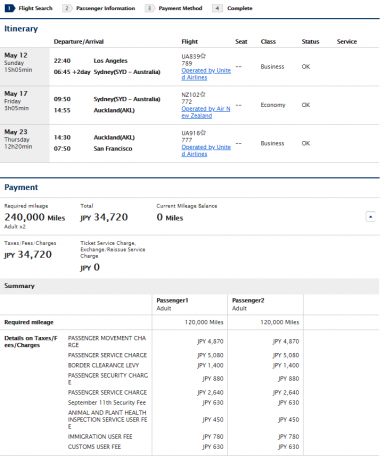 Filed Under: Miles and Points
← How Many Ultra-Premium Cards Do You Have in Your Wallet?
My Mini Guide to Lençóis Maranhenses, the Most Unique Wonder of the World You’ve Never Heard About – Part 2: Costs and Logistics →
0 0 votes
Article Rating
Subscribe
Login

Can this be done from the NYC area?

Yes, if you find award space from EWR to IAH, LAX or SFO that matches your departure times (Business Class is almost never available to the West Coast, though), you can build this itinerary from the East Coast. Start by finding the dates on the United site, then feed your itin to ANA.

Is it possible to incorporate Fiji with this same 120k? I’m planning an island trip of Fiji and four of the nearby islands and Australia/New Zealand aren’t requirements of the trip. Fiji is the most substantial airport and there appears to be a flight between Auckland and NAN. I know I can get from the US to Fiji with Alaska miles but those are so valuable I’d rather save them.

Well, if there is award space, of course, you can! Just book a flight to Fiji via Auckland with United and ANZ for the same amount of miles. And you’re right, it’s a better option than Fiji Airways anyway — slightly more miles, but lie-flat rather than angled.

So taking that further, I should be able to add on my domestic flight too, if I can find availability. Will ANA care if I’m mixing in economy ? I’m thinking DEN>SFO(or lax or IAH) > AUK > NAN and back, only adding Sydney if availability requires it. Would that be allowed? Are there limits on segments? Thanks!

Well sorry, but I’d rather stick needles in my eyes than fly UA biz class on a longhaul flight, even to Australia.

Or do the RTW ticket

We are currently in New Zealand on a trip where we transferred AMEX to ANA to get business award seats on Air New Zealand at 120,000 RT each. There were quite a few available dates from LAX to AKL to choose from. Just be aware it can take up to 48 hours to transfer points from AMEX to ANA but if you make your arrangements quite a bit in advance the seats you want should still be available……