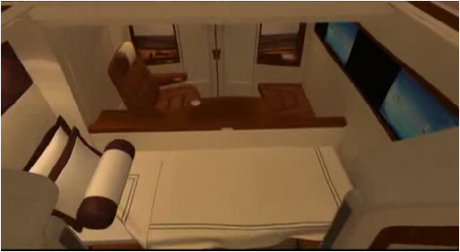 There used to be times when you could easily find Singapore Suites Award Availability. No more! Since Singapore Airlines became partners with all four U.S. transfer programs: SPG, AMEX MR, Chase UR and Diner Club, KrisFlyer miles have become too easily accessible for the airline’s taste. Availability has drastically dwindled.

Nowadays, Singapore puts practically all their premium class inventory on the U.S. routes into the Waitlist bucket. You waitlist your ticket, and if it clears, you’re a happy camper; if not—you’re SOL. And no, they seat doesn’t always clear, even when Singapore doesn’t sell them out (just check out this Flyertalk thread). That’s just the way it is. No one has discovered why some tickets clear while others do not.

Wait-listing a Singapore Suite ticket is still the way to do it if you’re super-flexible and don’t mind parking your points in the Singapore account anyway. You can waitlist as many dates as you want, so you’re bound to strike gold sooner or later. So, by all means go ahead and do that if that works for you. Even if your ticket doesn’t clear, Singapore miles can still be redeemed for some good deals on United or other airlines in the Americas to which Singapore doesn’t add any fuel surcharges.

The problem with this approach—to me, anyway—is that I hate waitlisting. It’s just too long and unpredictable. And I mostly fly solo—imagine the anguish if I had to planning a family trip hinging on Singapore Suite Award Availability! Anyway, waitlisting sucks! Agreed?

Luckily, there is another way to get your flight 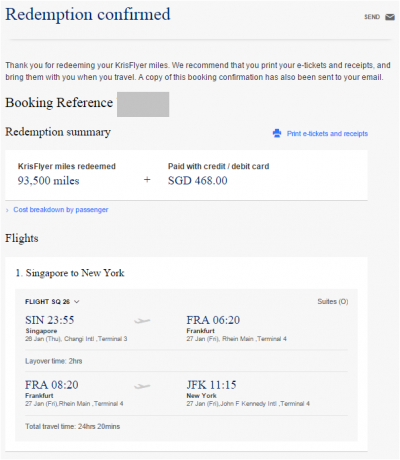 If you want the longest possible time in the air, don’t search for Singapore Suite availability on a flight from the U.S. There are plenty of ways to get a business class ticket to Asia, as I’ve outlined here and here. Aim at getting the Singapore Suite for the flight back home.

There are very limited options of enjoying Singapore Suites on the flights that involve a leg from/to the U.S. Basically, there are three.

The reason I mention NRT is that there is the fourth way. You can fly from JFK to NRT with a transfer to HND and the second leg to Singapore. This route, though, is not ideal for three reasons:

You can counter that there is another option, between JFK and Frankfurt. You’d be right right, but I don’t believe it to be a reasonable choice. Look, I don’t like to sample products, I’d rather enjoy them. A flight to Frankfurt lasts less than 7 hours, so seriously—what’s the point? Besides, I’d rather be in South East Asia during the winter time than in Germany. Of course, to each their own. 🙂

The flights above will give you enough time to eat, work, play and sleep, and in case of flights to Singapore—that second leg opens the second chance to get that elusive double bed in the sky if you are flying solo.

What you need to do is to open your Singapore KrisFlyer account and begin searching as far ahead as the system goes, 354 days or so.

Note that the datapoints below reflect my research on 2/7. YMMV, and most certainly will! 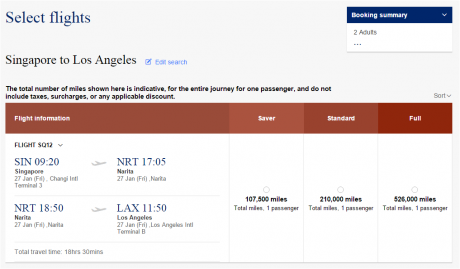 If there is anything I hate more than waitlisting, it’s fuel surcharges. Really, really, really hate! 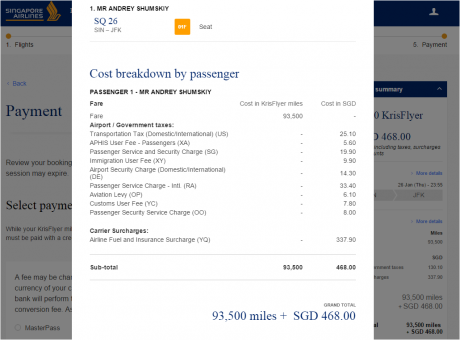 A one-way flight on Singapore to Singapore will cost you $S338 or $240 (the rest are legit fees and taxes). I surely haven’t paid that much for any first or business class seat ever (although I’ve paid more for economy. 🙂 ). There is a little comfort in that Singapore’s fuel surcharges are relatively mild. It is hardly the worst offender in terms of YQ; think BA or Lufthansa as the airlines you should never fly long-haul on an award ticket.

I guess, by now you already know that when paying with a credit card in a foreign country you should always decline the so-called “dynamic currency conversion” (AKA please-click-here-so-we-could-rob-you-blind), but what about paying the foreign-based company in your own country? Well, the same rule applies. Pay with a credit card that doesn’t charge the Forex fee and decline the conversion. Out of curiosity I ticked the conversion option and was quoted $350, while the exchange rate was $332. After I proceeded with the payment (without the

conversion of course), I was charged $335, still slightly higher than the “Google” exchange rate, but not by 5%.

Transfer is not instantaneous!

You need to make sure you do have Singapore Suites award availability before transferring miles, but even then it’s not a slam dunk. My Citi Thank You transfer took about 24 hours (unfortunately, I don’t know if it was 20 hours, or 22, or 23:50), but their official policy is up to two weeks. From what I know, neither Chase nor AMEX transfer to Singapore instantaneously either, although they also transfer within or around 24 hours, so there is always some risk involved. In my case, I transferred miles on Friday night, and they were in my account on Saturday night, so it seems that transfers work during the weekend just fine.

[…] advice from the Lazy Traveler in how to book Singapore Airlines awards. I hear they have some type of Suites or […]

Hey Andy,
I never seem to get these updates in my email ny longer….

Same here. I never get these updates in my email any more

I am truly sorry about it. I had to stop sending the newsletters since I just failed miserably to put out content at some point. i mean, sending a newsletter about one or two posts a week is pathetic. I had a real work overload in December and January, but I’m going to resume the newsletters very soon since I’m doing much better now. 🙂

Andy, do what you can and keep up the good work….

Lazy Traveler Lazy Blogger. I love it. Keep up the great job I really appreciate your time and effort.

Thanks Robert! You got me. 🙂