Rio greeted us with pouring rain. We knew it would be rainy, but still were hoping the weather.com would be wrong. It wasn’t. Sigh

We cleared the customs and went to the arrival area. The first taxi kiosk we encountered quoted R$135 to Leblon. Rip off. We went to the currency exchange next door to see how much exactly it would cost us to be taken for a ride. The girl quoted the rate 1.79 to dollar. Rip off again. Jumping slightly ahead, the exchange rate was 2.2 while we were in Rio.

I normally take Real bus from the airport when I come to Rio. Takes a little longer, but with a price tag of R$!2 for a reasonably comfortable ride in an air-conditioned bus, it can’t be beat–when you stay where all the tourists stay–in Copacabana.

This time around, though, we weren’t staying in Copacabana. We were staying at the Sheraton Rio Hotel and Resort in Leblon. And not even in Leblon—no matter what they claim—this hotel is located in the next neighborhood called Sao Conrado. For those of you, guys, who are not familiar with the districts of Zona Sul, where rich American tourists like you and I (LOL) tend to stay, here they are at the glance in the order of appearance (on the way from the airport).

Then add two more neighborhoods to the right.

Getting to Sao Conrado on a bus that’s picking up and dropping off passengers along the way would take us no less than three hours in Rio traffic (later about Rio traffic), so we decided to splurge. Walk down the terminal past car rental desks (listen to this New Yorker and do not rent a car in Rio!) and you will see an airtaxi booth on your right. That’s what you are looking for. The price of the ride was R$62 including two pieces of luggage, but I added a few Reals because, as I’ve said before, Sheraton is technically outside Leblon.

We paid with a credit card and skipped the exchange altogether. Next thing we knew, Mother Nature smiled upon us, and the rain had stopped by the time we left the terminal. And it didn’t rain (a few small drizzles, perhaps) during our whole 3-day stay in Rio.

We arrived at the Sheraton and saw this. Everything was right in the world again. 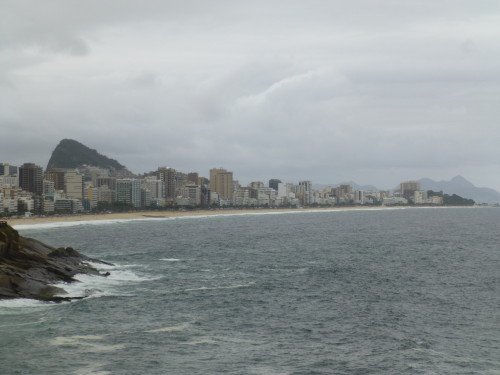 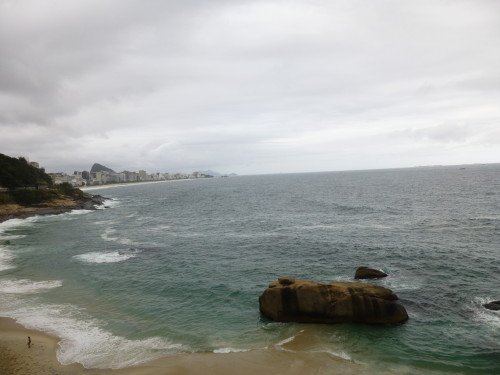 I will write a separate review of the hotel, as it is totally worth it. In the meantime, let’s not forget why we went to Brazil in the first place. I’ll let the pictures talk for themselves.

To say that not everyone is happy about Brazil hosting the World Cup would be a huge understatement. There have been a lot of protests across the country against spending billions of dollars on a one-month event in a poor country with severely underfunded public sector. On June 10th, the day we arrived in Rio, the protesters installed giant footballs with a red cross and a typical favela house on Copacabana beach. I had a few very good shots of the whole thing, but I incidentally deleted them (I have no idea how). This photo shows the footballs and the favela in the middle of the beach. The sign accompanying these giant footballs that is not in the shot states this:

World Cup in a country of misery, financed by public money, is a moral problem.

Somber, to say the least.

Still, on June 12, the day of the inaugural Brazil Croatia game, the protesters were nowhere to be seen and Rio was buzzing. The city built a huge LCD screen on the beach across from the Copacabana Palace hotel for those less fortunate cariocas and tourists alike who wouldn’t be able to fly across Brazil and follow the games. This is the crowd walking down Avenida Atlantica. 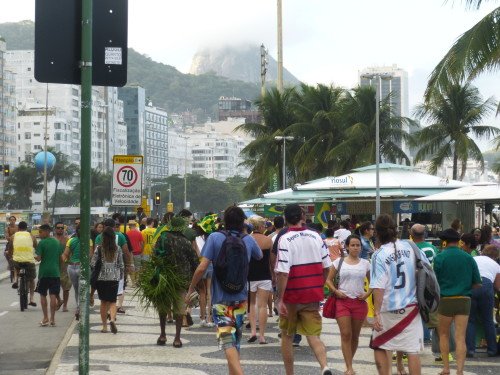 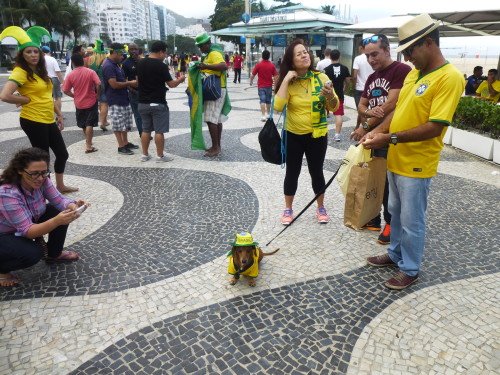 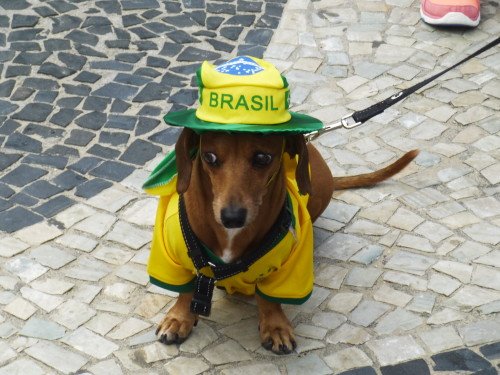 Orange might be the new black, but not in Rio. In Rio it’s the color of municipal workers “unleashed” on the city streets to keep them clean, well relatively. Don’t run. Unless there is gunfire. 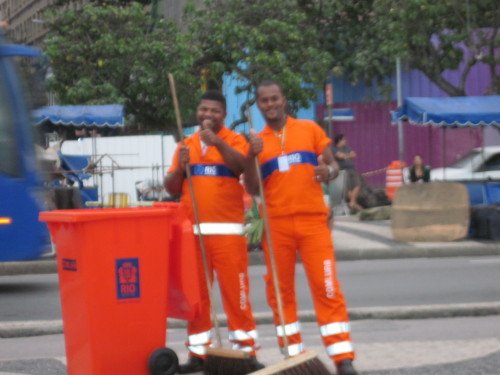 The coveted spot on the sand. 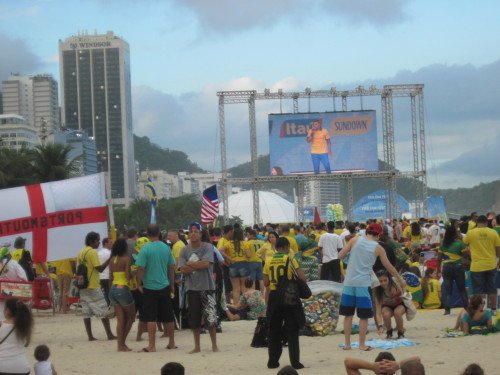 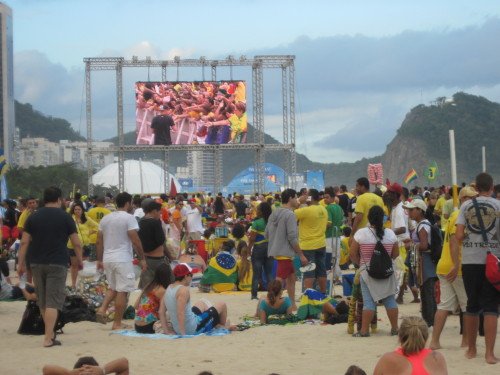 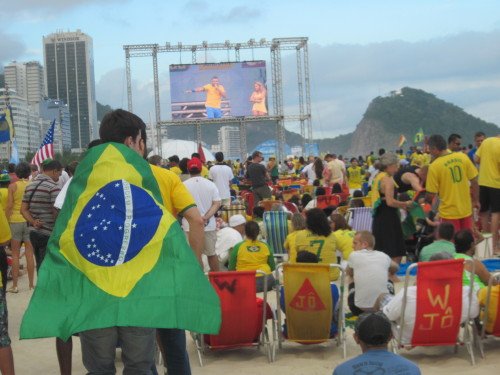 Here is one shot that failed to impress the public! I wish you could hear the booing from the crowd. Can it be that Brazilians are not enamored with their present government, LOL? 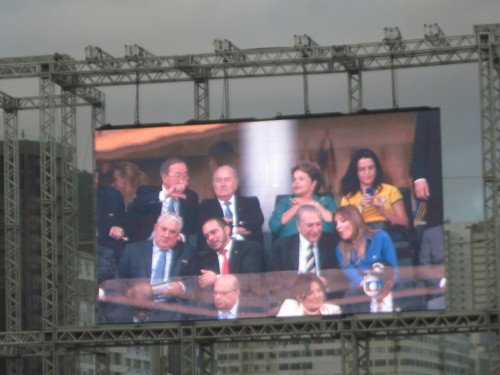 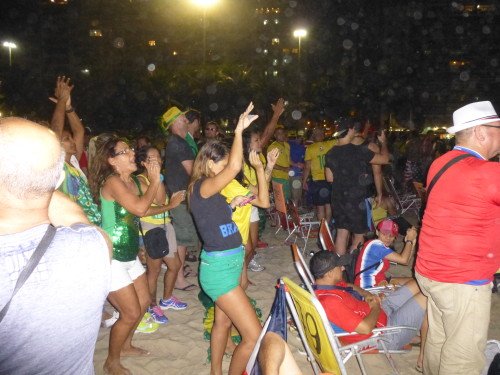 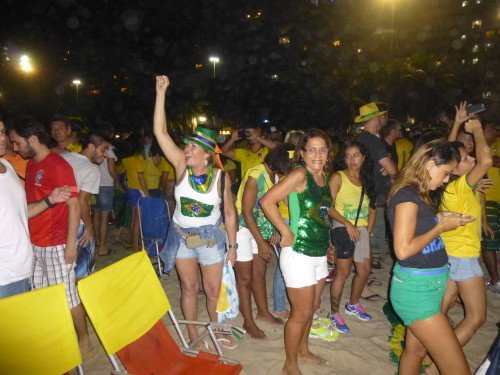