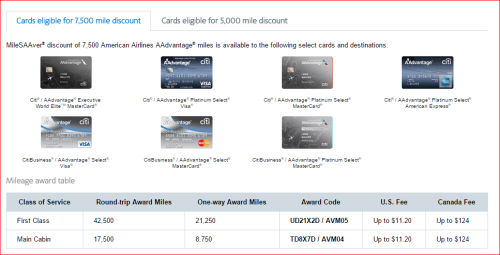 Those of you, folks, who are holding one of the American Airlines credit cards above, have access to generously reduced miles award redemptions in the United States and Canada. Of course, the British Airways Avios will still go a longer way for very short hops, but in all other cases, you will be better off with discounted AAdvantage miles. The savings are especially good for the economy cabin: 7,500 miles or 30% off. If you want to fly in first, you get the same 7,500 miles off, but the discount is only 15%. Unless it’s a transcontinental flight, I wouldn’t bother.

One more thing: you can’t book it online. You have to find availability, then call; and yes, it’s going to cost you $25.

Here are some destinations I find especially interesting. But it doesn’t mean that others are not.

Like I said, if your favorite city is not on the list, it doesn’t mean it’s a bad city, and/or there is nothing to do there. It just means, I’m ignorant. 🙂

20% Discount on United Airlines Mileage Plus Awards to the US (and Hawaii), Mexico, Canada, Europe, Middle Asia and Japan 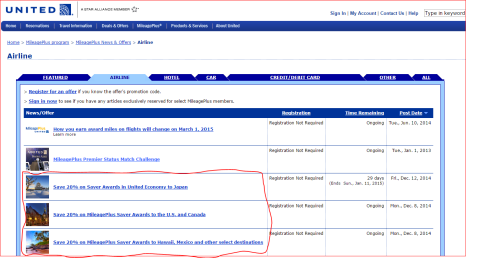 American Airlines doesn’t hold a monopoly on reduced miles awards. Dan’s Deals has a  terrific, in-depth post about United deal (or should I say deals). Read it here.

There are two components to the United Airlines discounted miles awards. Some of the deals are published on the United site. You can see them in the pic above. They offer a 20% discount on coach redemptions only, which is completely in line with what United has been trying to do since their last devaluation: dissuade us from flying premium class for free. 🙂

The other deals, however, are so weird that they feel like a glitch. First, I haven’t found them advertised anywhere on the United Airlines website. And second, these deals give you a discount for flying in business class on partners. I have a feeling that this is something that goes against everything that United believes in (LOL), but what do I know!

Save 20% on Saver Awards in United Economy to Japan

For a limited time, let United whisk you away on a Japanese adventure with a 20% discount on Saver Awards in United Economy® to Japan. Whether you want to visit the bustling city of Tokyo, or experience the traditional feel of Osaka or Kyoto, United can get you there.

Please click on the link above for the rest of small print.

For flights in Japan, use Avios and pay, like $2 in taxes. What? Don’t believe me? 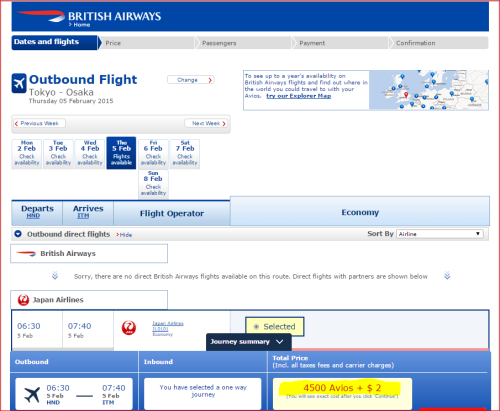 Now, 56,000 miles for a roundtrip flight to Japan surely sounds like a great deal, and it is. But let’s not forget that American Airlines offers an even better off-season deal to Japan for 50,000 miles (actually 45,000 with the rebate), and their off-season ends on April 30th. Still, you might have a reason to value American AAdvantage miles higher than United Mileage Plus, or you might have a problem finding AA availability for the dates you want, in which case, the United deal is great.

Save 20% on MileagePlus Saver Awards to the U.S. and Canada

Make the most of this winter by enjoying a 20% discount on roundtrip Saver Awards in United Economy. Whether you want to explore city streets or snowy mountains, United is your ticket to the perfect winter vacation.

Quite honestly, I don’t understand this offer, because the next bigger offer covers the travel between the US and Canada and Hawaii, anyway. Perhaps, it’s just late and I’m missing something.

Save 20% on MileagePlus Saver Awards to Hawaii, Mexico and other select destinations

Take advantage of this special offer on a United Economy® roundtrip Saver Award to select ski and beach destinations.

Make the most of this winter by enjoying a winter getaway with a 20% discount on roundtrip Saver Awards in United Economy. Whether you want to explore the sandy beaches of Hawaii or the snowy mountains of Banff, United is your ticket to the perfect winter vacation.

Discounted Saver Award is valid only for travel from the U.S. to select destinations in the U.S.:

And between the U.S. (excluding Hawaii) or Canada and Hawaii or Mexico

Also keep in mind, that the United flights shorter than 700 miles are always discounted by 20%, and this deal here doesn’t give you any additional savings. For example, a flight between Newark and Quebec City is less than 700 miles, and it always costs 20,000 miles per roundtrip.

Or take the Mammoth Yosemite Airport. There are only four flights there (all seasonal), from San Diego, Orange County, San Francisco and Denver. Is 20,000 miles an exceptionally good deal for this airport? Of course, but only from Denver. Other airports are situated within a 700-mile zone, and are covered by this discount anyway, at any time of the year. 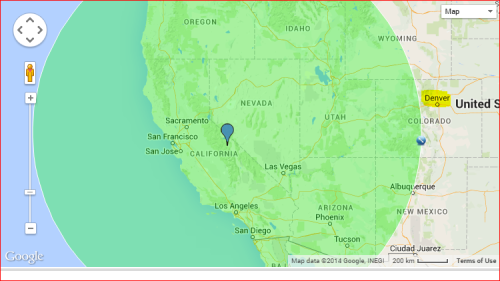 Sometimes, an obscure program can offer an unbeatable deal, even if such deals are limited in scope. A Spirit Free Spirit ticket between New York and Fort Lauderdale can cost you 5,000 miles per roundtrip! That’s less than the minimum award rate you can get with Avios! Throw in $80 for a Big Front Seat and you’ve got yourself a first class flight for next to nothing.

Per Dan’s post (the redemptions still work at the time of writing) you can redeem business class seats on Star Alliance partners for the same 20% discount. That would make it 56,000 miles one way to/from Europe, or 70,000 for a flight to Central Asia. Whether it’s a glitch or a genuine, unadvertised discount remains to be seen.

If you have no interest in flying to any of this countries, here is a trick (again per Dan’s Deals) to fly anywhere in Asia for the same 70,000 miles (anywhere if you find the right connection). You can, for example, fly to Almaty via Seoul and skip the last segment (Seoul is in South Asia and so the regular redemption rate would normally be 80,000 miles). I found that the same trick works for Delhi. You could fly to Delhi for 70,000 miles, or you could book a flight to Delhi via Seoul or Tokyo and skip the last leg. In case of Tokyo, however, you would be saving measly 5,000 miles, so I don’t see the big deal.

The flights to Seoul are served by Asiana, and to Tokyo by ANA. Both airlines have terrific business class seats and service.

You could even book a seat to the Maldives for the same 70,000 miles, but availability is scarce, and I couldn’t find any dates where all segments would be available in business class. And they are long segments.

Quite honestly, I don’t think I would bother at at with flights to Asia to save lousy 10,000 miles. First, stopovers don’t work on these routes (or I was unable to make them work), and second, if you have to skip the last segment, you can’t check a bag.

Flights to Europe, however, is another story. 115,000 miles for a roundtrip is a very solid deal if you want to try some great European products like Lufthansa, Austrian, and even LOT (that flies Dreamliners between Warsaw and North America). Just make sure you check the equipment. If you are paying more than 100,000 miles for your trip, you want the top of your class product. For example, LH’s business class experience on 747 is reportedly much better than the one on A340, which means you might want to connect in Frankfurt, rather than Munich. And Turkish Airlines is still flying old A340 aircraft with angle seats, while you want to enjoy a fully lie-flat A330. So do your research and read a few reviews before booking your killer deal. For the same reason, I believe, TAP should be avoided unless you know that you are flying on an upgraded plane.

Have any questions or suggestions on how to use these deals? Share them here.

Want to know more about free travel hacks? Sign up for my newsletter (top left). I’m going to change a few things around here, starting with a little experiment. I have been criticized in your emails for slacking out with the newsletters, so I will begin sending at least one weekly digest, starting this weekend.  Let me know what you think.