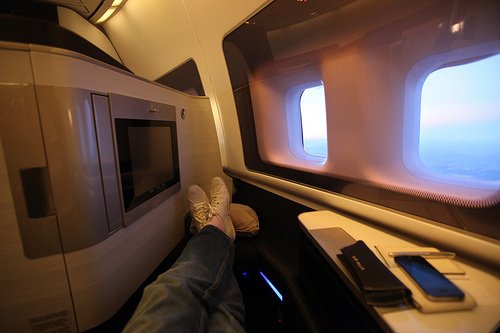 Everyone knows that booking an award seat in premium class represents best redemption values. Depending on your destination, you can get 6, 12, hell, even 20 cents per mile if you redeem in Business and especially the First. Compare that to lame 1.5-2 cents on a mile in lousy domestic economy. Well, maybe 3 cents if you’re really lucky.

The thing is, you need to be careful about what you “know”. Your Mileage May Vary indeed.

Let’s try and revisit one of our beloved programs: Chase Ultimate Rewards. Why them? Because they are the only program that combines the ability to transfer points to airline and hotel partners with getting cash at 1:100 ratio. This is the only program that allows you to legitimately cash out on your points or miles with reasonable ratio. Still, everyone knows that cashing out UR points is a terrible idea, right?

Let’s try to find out exactly how terrible?

If you use UR points for a roundtrip ticket to, say, Tokyo, you will pay this:

I picked Tokyo  because I wanted a longer flight with good United Metal availability. I didn’t want to go into the whole Partner Business/First Class extravaganza because pricing for those is so insanely skewed after the devaluation that illustrating my point would be too easy.

So how’s the value with the new United? Still looking good? I didn’t think so!

But let’s say, you can find a really great redemption in business or first, like 10-12 miles per penny. That’s not impossible if you’re less lazy than me and look hard enough. Surely, this kind of value is a no-brainer, right?

Well, just bare with me for a little longer. Let’s do a simple mental exercise.

Imagine that you’re about to board the plane, your United Business boarding pass in hand when the gate agent tells you this:

Sir, we are overbooked. If you agree to fly to your destination in an economy seat, we are prepared to pay you a compensation in the amount of $600 for your trouble.

What are you gonna do? You’ll laugh, perhaps. You would expect a much higher compensation. Perhaps, you’ll refuse anyway, since you’re already in the mood for some serious pampering. Good food, top-shelve booze, a flat bed, some nice movies. You have been looking forward to the experience. Even though United Business class doesn’t get close to the quality and service of our favorite Asian and Middle Eastern airlines–seriously, how bad can it be?

I, on the other hand, will start cracking up numbers in my head. Mostly because I’m a cheapskate.

The flight between New York and Tokyo is 14 hours long. That’s a lot of time in coach. I’m a big guy, and I have a trouble sleeping on an airplane. Even in a flat bed, it’s kind of difficult for me.

On the other hand, $600 divided by 14 hours is roughly $43 an hour. Basically, you are offered to be paid $43 an hour to stay in your seat and do nothing! You can even have some work done on your laptop. Or you might catch a good movie or something along the way.

For $43 an hour… You’re still getting to your destination, you know.

There are people who can afford to pay zillions of miles or even cold, hard cash for the best experience that miles or money can buy. Are you one of those people?

You could say that this scenario is absolutely ludicrous, and you would be right. Even so, let me offer you another scenario, even more ridiculous than the previous one. Forget about your trip. What if someone called you and offered you $43 an hour just for flying in a United economy seat for 14 hours. Would you take it?

The thing is, by paying 130,000 Ultimate Rewards points for a business class seat on United (instead of 70,000 for coach), you’re effectively blowing away 60,000 UR points. You could easily cash them out for $600, and that would still be a terrible redemption. I think most frequent fliers would agree that a UR points are conservatively worth about 2 miles per penny.

So how about that? Do you believe that transferring your UR points to United for Business or First Class seat redemptions is still worth it?

Seriously, it’s a real question. Say what’s on your mind.

Brilliant way of thinking of it. Yet, the opposite should hold true as well, no? If you paid 70k points to fly coach, and you were offered an upgrade to first class for $600, would you take it? (Not saying this would, or should, change the answer, but I think it’s equally valid thinking.)

Thanks for the comment Ed. You’re absolutely right, it does hold true. There isn’t the universal right answer for everyone. A lot of things are in play here, even your mood and your physical condition. Besides, when you travel with a family or a SO, this is not even a question, you don’t want to save money on account of family peace. What I’m saying is that everyone, me including, should take these factors into consideration rather than make traveling on a premium ticket their ultimate goal. It’s not like I don’t get carried away sometimes, just like the next… Read more »

Brilliant argument. I love the way you think.

the most expensive i did was AA miles for NRT bOS (stop) carribean for 50000 miles. all other long hual were to/from guam using miles. 130000 miles is too rich for me. i wouldnt mind the 90000 US J award…
i am still waitlist for UA J from SWU for 1150 usd round trip, and most other J were AA SWU. never redeem UA miles for J Trans pacific. but have done a lot of asia south pacific in J

nice way to put it.. I often try to justify whether all the extra miles spent on F/J are worth it. Rationally they are not but we are all irrational. And justify the additional cost in the name of “experience”. We only live once..

All CPM calculations are flawed. Experiencing singapore F/J is priceless so are the stories you will tell.

I know what you’re saying. So far I’ve tried 2 best F’s in the world: Asiana and Cathay, I’ve already booked Emirates for my fall travel, and I want to try Singapore and Etihad Apartment (not Residence, I’m not that crazy). I think I will try to stop there and mix J and Y from then on. It’s still important to me to remember why I love packing my bags, which is not to feel like a big shot for a few hours. 🙂

norwegian air is seriously making me rethink any mileage redemptions to europe.

I would much rather spend my points to stay in a nice hotel for a week (168 hours!) rather than spending then for a 15 hr flight experience. Plus the hassle of finding award space is a non issue with hotels.