I’m revising this post because ANA has made more changes to their fuel surcharges — not just to their own award tickets, but their partners as well. When you see red, it means new info.

I left this post from April 2018 intact as the point of reference.

If you have ANA miles or transferable American Express Membership/SPG points, you might get a better value from ANA  than ever before. Let’s just be clear: the redemption levels haven’t changed, but the cash outlay has, and in some cases — to the tune of hundreds of dollars!

Last week I reported that ANA has stopped adding fuel surcharges to flights on their Star Alliance partner Scandinavian Airlines. That’s a huge thing, IMHO, because finding Business Class award space on United or Air Canada is not an easy task.

That nudged me to take another look at what’s going on with ANA fuel surcharges. Last time I checked was almost two years ago in this post:

It’s no secret that I love ANA Miles, even though they add YQ

ANA has a very good, Business Class friendly award chart for both their own flights and Star Alliance and other airline partners. In fact, it’s exactly Business Class where ANA shines – neither Economy nor First offer values vastly superior to U.S.-based frequent flyer programs, although there are exceptions to this rule.

Yet ANA does add fuel surcharges to its own flights and most of its partners flights, and I’ve probably got some ’splaining to do, considering how much I’ve bitched about those pesky scamcharges (usually coded by airlines as YQ).

Most people who aren’t travel agents and miles aficionados don’t care about fuel surcharges because a revenue ticket already contains them. Travel agents hate them because they get stiffed on commissions, and we, “enthusiasts,” hate them because they add a cash component to a supposedly free ticket. The fact that airlines keep getting away with this scam in most countries is mindblowing, because, seriously, those shenanigans shouldn’t be legal.

In 2016, after oil had gotten dirt cheap, ANA dropped its fuel surcharges. Not out of the goodness of its heart, mind you; rather there is a law in Japan prohibiting airlines from overcharging for fuel (and they have to apply for and receive permission from the government on a bimonthly basis). So, this lovely, legalized accounting scam perpetrated by nearly all European carriers is not legal in Japan, at least to the degree it’s practiced elsewhere.

Since 2016, however, the price of kerosene has risen, so Japanese airlines are at it again. Right now the cost of fuel surcharges adds $86 each way if your travel originates from North America. It’s not pleasant, but even a cheapskate like me can live with that. 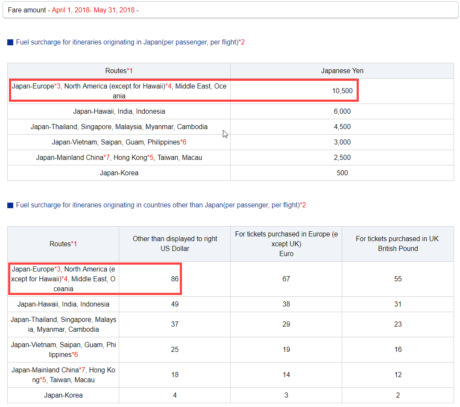 if your flight to Japan originates in the U.S. you’ll pay the $86 fuel surcharge per segment in addition to taxes

Let’s take the simplest redemption possible. 2 years ago, a roundtrip award flight between New York and Tokyo used to cost $85.39 in taxes and fees (no YQ). Now it costs ~$256 with ~$173 in fuel surcharges. 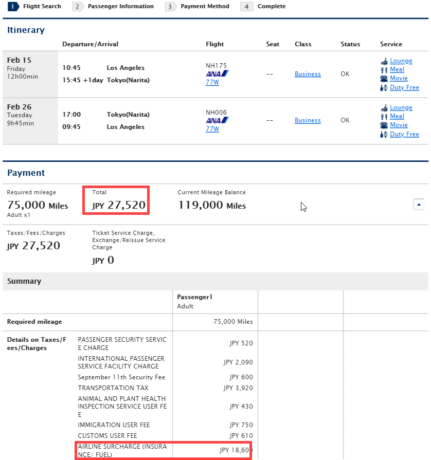 So, that’s straightforward enough even though it sucks. Well, simple roundtrip flights are easy to figure out, but when you add connections, whatever YQ the airline charges defies logic sometimes. But don’t worry, it’s not necessarily a bad thing. Let’s take another look at the ANA fuel surcharges on their own flights and their partners’.

Back then it felt very strange to me that ANA would remove fuel surcharges from its award tickets to Japan (according to the law), but leave them intact for some destinations beyond Japan. It was also weird that ANA would add fuel surcharges to partners that didn’t add them to their own flights, like Air New Zealand. I even tried to reach out to the airline to find out why, but never got a straight answer. It didn’t make any sense to me at all.

Well, these strange surcharges seem to be either drastically reduced or eliminated altogether. Which is no less strange considering that ANA does add fuel surcharges today – unlike 2 years ago.

I wish I could report that all ANA changes are peachy and rosy, but I won’t lie. The weird thing is that the routes that had YQ 2 years ago now cost less, while some routes that didn’t have YQ back then – do get them added now. If there is any rhyme or reason to this, I’d surely like to know.

Here are some examples.

Are you seeing what I’m seeing?

Tell you what: I’m not complaining.  😀

Whether I do or don’t understand the logic behind ANA YQ pricing (I don’t), it doesn’t really matter. The point is, if you want to add another city in Asia to your flight plan on ANA metal, it will cost you either less or roughly the same as a nonstop trip to Japan (with the exception of Beijing). And if you want to see 2 cities in Japan, it will cost you exactly the same.

UPDATE 10.26.18: No more fuel surcharges on Air China for travel between North America and Asia!

Today Air China is your best bet for flying to Asia on ANA miles. Not only is there no fuel surcharges anymore, it also has great availability in Business and First. Note there is still a sizeable fuel surcharge added to Air China intra-Asia flights.

LOT will set you back $120 for a round trip between the U.S. and Warsaw.

LOT is the cheapest European Star airline in terms of fuel surcharges: only $120 per roundtrip between the U.S. and Warsaw

Turkish charges more than twice as much between the U.S. and Istanbul; however, its flying network is nothing short of sensational, and its Business Class award space is frequently wide open. 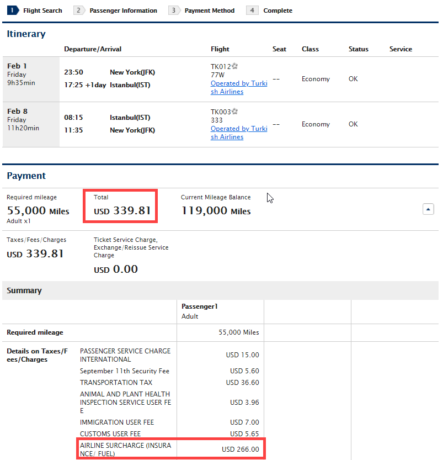 Turkish has a higher YQ surcharge than LOT: $266 per roundtrip between the U.S. and Istanbul (still considered low by European “standards”)

For flights to Asia, Eva is probably your best bet with only $66 in fuel surcharges between the U.S. and Taipei. 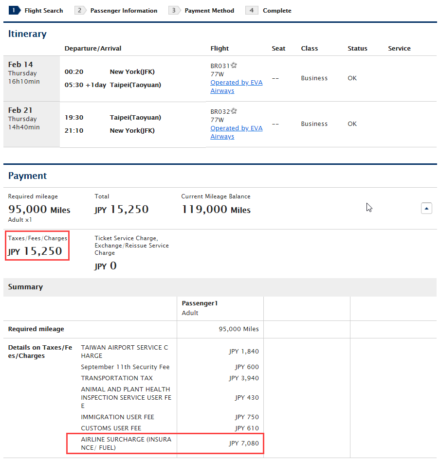 Eva is great for travel to Asia: only $66 YQ between the U.S. and Taipei per roundtrip

Asiana’s fuel surcharge will set you back $222 in YQ charges for a flight between the U.S. and Seoul. That’s almost a 40% increase compared to 2016. 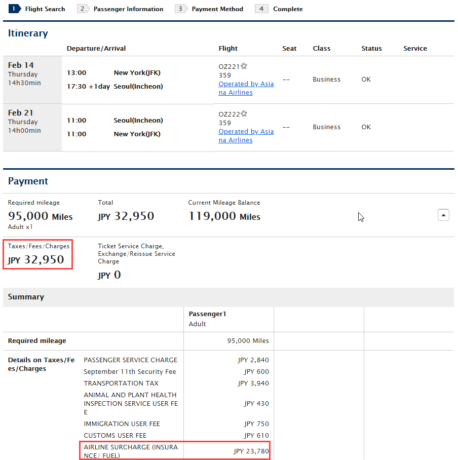 Asiana has a higher fuel surcharge: $222 between the U.S. and Seoul

Let’s recap: how to save cash with ANA Mileage Club award tickets

No fuel surcharges at all.

To fully avoid fuel surcharges, fly United, Tap Portugal, Scandinavian, Air Canada, or Singapore (only to Frankfurt and Manchester). Note: it’s virtually impossible to get Singapore in premium classes on a partner’s award.

To save on surcharges, fly LOT or Turkish. All other European airlines’ fuel surcharges are $400 to $500.

To avoid fuel surcharges, fly TAP Portugal via Lisbon to Israel (from 3.19.19), Morocco, Senegal, and Mozambique, among others. Can’t avoid the surcharges on South African ($400+).

To save on surcharges, fly Eva (very low) or Asiana (moderate). Fly ANA if you want to visit Japan, especially in low seasons (you’ll save on miles).

Use Air New Zealand or United (no fuel surcharges).

So what do you think? Have ANA miles become more or less valuable to you? Share your thoughts.

SO useful! Better than anything I’ve read on blogs so far in 2018.

Now if ‘someone’ could do a new Flying Blue award chart with surcharge info, since it looks like they dropped some prices slightly. Trying to figure out what to do with my Amex MR: Virgin, Aeroplan, ANA or FB. Maybe a transfer bonus will help with that…

Thanks! Never been a fan of Flying Blue. The values are not that good, and then it’s their weird attitude toward transferred points. There should be another Virgin transfer bonus by the end of spring, so I’d either consider that or ANA.

Thanks Andy for great review. Only you and Drew do this stuff ( Drew used to as he does not post anymore). As with ANA miles – hard to say if they are more valuable or less as Amex is kind of stingy with lifetime language, so just sitting on some MR points, never transferred them to ANA, maybe will in the future.

Thanks Boris! I can’t write every day, but at least I post about things that interest me and that can provide some value to others. And I also keep my AMEX points intact until I get my travel plans finalized.

[…] Lazy Traveler takes a deeper look at ANA redemptions and fuel surcharges. We may actually have some good news for a […]