What is ANA Airways and why is this important

ANA (All Nippon Airways) is a member of the Star Alliance, and it has been immensely popular with the travel hacker crowd for several reasons:

The above features were the second main reason I converted a lot of MR points into ANA Airways Mileage Club miles last year. The first reason being that I was about to close my AMEX Platinum card and needed to find a new home for my soon-to-be-orphaned points.

ANA Airways is changing their Mileage Club program starting April 12 from a distance- to region-based.

If you have been putting off using ANA miles, think if now is not a good time. If you have any plans—even tentative—you might want to consider spending your miles now, because in general, it’s getting worse. Much worse!

The changes that — as we had hoped — would open up a new world of possibilities are not going to materialize. Drew from Travel Is Free wrote a great post on it back in the day when the new chart had just been announced. Unfortunately, it seems that ANA “had come to their senses” and gutted that chart in its infancy. If you were holding out for some sweet spots, you might reconsider.

Here is the original ANA Airways chart that was to go into effect on April 12 per Travel Is Free. All rates are roundtrip for Coach, Business and First.

And this is their January update for flights on partners. Note these two improvements in the green circle. That’s it. The end of the good news!

You might argue that a business class flight to Korea, Hong Kong or China for 95,000 miles is not such a bad deal. That’s true, but remember the infamous fuel surcharge that you will pay on these routes. That will run you $300-400+ depending on the carrier.

The ANA Airways chart on their own metal will have somewhat of an OffPeak version of awards, as they have divided it by Low, Regular and High seasons. Here are the award levels for flying from North America to Asia, but first, here are the ANA and Star Partners Zone Maps. 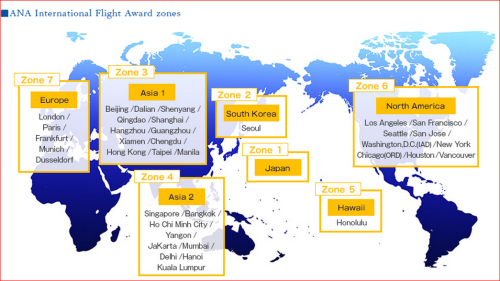 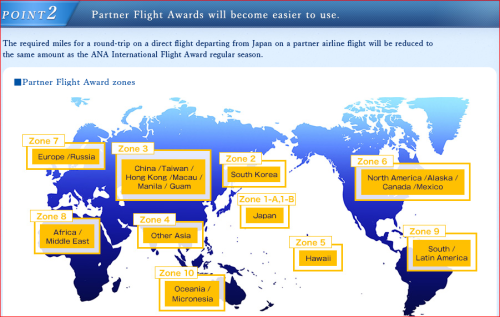 And here is the season chart. Nothing is ever easy with ANA.

Next ANA fuel surcharge revision (they revise it every two months or so) is set for April 1. It will be interesting to see how it goes, although I don’t expect them to lower it any further. The cost of fuel has gone up in the last month after all.

Well, maybe not. ANA has the following partner airlines outside of the Star Alliance:

Domestic Awards in Japan are getting reduced after April 24

Per FT Armagebedar, domestic awards are getting lower. For example, here are the changes between Tokyo and Osaka:

While this chart may not look too bad compared to other region-based programs — especially United and Delta, it is a major devaluation from its current form. Not only will you lose the four free stopovers (although unlike Drew, I have never been able to compute more than three into my routing), your mileage will almost invariably suffer. Drew dissected the best routes that can be booked with ANA miles, so check if you’d be better off booking now rather than later. Remember, ANA Airways only charges 3,000 miles for canceling your award, so it’s not a big deal anyway.

A 2nd update to ANA’s new award chart – what bargains are left? | MileCards.com

[…] apparently some of them were too good, and Lazy Travelers reports ANA has once again updated the charts for April […]

4 ANA Award Chart 2015 Sweet Spots — You Might Be Surprised! | The Lazy Traveler's Handbook