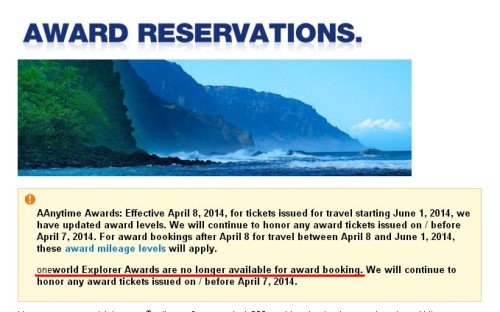 Let us begin with what they’ve done so far. Although, keep in mind, this is a very sneaky devaluation, as it has never been officially announced. What’s incredibly disgusting about it is that the two worst changes have been done with no prior notice.

1. They have eliminated Explorer Round-The-World Award.

2. They have eliminated stopovers making AAdvantage probably the only major program that does not allow stopovers on award tickets.

4. The call service fee is raised from $25 to $35. That double sucks, because there are plenty of partners that cannot be booked. They are penalizing us for their own shortcomings.

3. They have made some other bad changes, too, that I will talk about in a moment.

With NO ADVANCE NOTICE devaluation, @Americanair sets the new LOWEST anti-consumer standards in the industry. #AAdvantageMAAsacre

The Explorer Round-the World award was an incredible deal, and so was the stopover rule. It’s true that many savvy people have taken these rules to the extreme, flying a lot of segments and often in premium class for a mere pittance. It is also true that the airlines have the right to protect themselves and their profits. However, what is inherently NOT OK is the way they have introduced the changes.

The problem is: EFFECTIVE IMMEDIATELY.

I twitted about my feelings and got a prompt albeit perfectly canned response:

@freetravelbook We can understand your frustration. The decision was made after a review of the marketplace and our global competitors.

I could only reply with this:

@AmericanAir Lack of ADVANCE NOTICE means you see your customers as enemies who need to be blindsided. #AAdvantageMAAsacre

Even if we agree to leave aside the morality, I believe it was a huge mistake. The Explorer Award was the feature that separated AAdvantage from every other frequent flyer program out there. So instead of tweaking it and making it, let’s say, less profitable to travel hackers, they’ve decided to kill it altogether. Sure, why not! They haven’t become the world’s biggest airline for nothing.

Eliminating the stopovers is mind-boggling, too. Sure, it’s been abused a lot. Folks used stopovers all the time to get a free one-way segment that had nothing to do with a genuine stopover. So I will ask again: why not tweak the program to cut us, the hackers, out of the equation and accommodate folks who really want to stop in Miami on the way to Latin America? Rather than introducing intelligent and sensible changes, the American Airlines AAdvantage program has just cut off two of its best features without advance notice.

US Air has quietly raised the business class redemption from the US to North Asia, thus quietly killing the best feature of US Air Dividend Miles Program. Advance notice? Oh  come on! That’s for suckers.

From now on, you will have to pay $35 for using the call center instead of $25. That would all be nice and dandy if American had a better award engine that included all partners. It doesn’t! There is no Iberia, Qatar or Cathay Pacific on AA site, so if you want to book those and some other airlines, you will have to call. What are they penalizing us for? Their own inefficiency?

To be continued. Stay tuned.