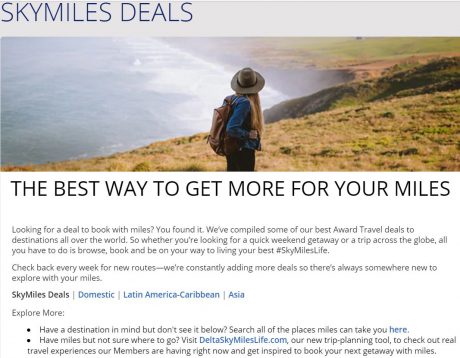 Every time Delta runs one of its SkyMiles deals it reminds me what a weird program it is. SkyMiles is perplexing and fascinating at the same time. After dealing with and writing about Delta for the last 5 years, I’ve come to the conclusion that its Jekyll/Hyde personality is not a quirk, but a well-thought-out feature. The glaring inconsistencies, as well as intentional, built-in errors of Delta’s past SkyMiles award chart were as legendary as they were bizarre and seemingly unexplainable, so you would think that after Delta got rid of its award chart altogether, there wouldn’t be a need for bizarre and perplexing award pricing, but no! If anything, the award pricing has gotten even more bizarre than ever before, but the good news is — just like before, you can often use it to your advantage. There are just 6 core principles of finding SkyMiles deals on Delta you need to know first.

1. Delta’s so called “dynamic award pricing” is a myth

Well, let me rephrase slightly: sometimes they do somewhat reflect cash fares, but other times, they don’t. Like not at all! There is no or very little truth in Delta’s claim of “dynamic award pricing,” for its award prices often have nothing to do with cash fares. Simply put, they’re all over the place.

That doesn’t mean it’s always the case. What it means is, sometimes it does, and other times it doesn’t. Once again — all over the place.

For the sake of fairness, I’ve found the latest SkyMiles deals to be almost universally good; and some deals, like a round trip between Boston or Orlando to Beijing for 35,000 miles, are simply exceptional. I know that ultra-long-haul flights in coach might be uncomfortable for many people (LOL), but just think about the value. When Delta did have a chart, 35,000 miles could also send you to Beijing, but only on a one-way ticket!

On the other hand, during the previous sale Delta advertised a 75,000-mile deal to Brazil. That was atrocious!

4. SkyMiles Deals that you can find on Delta are not limited to published sales

Here is what happens. You take a look at the Delta sale listing, find there are no destinations that pique your interest, and go back to those adorable kitty videos on YouTube. Well, it might be your loss. For example, the latest sale says nothing about Europe.

Back when Delta did have a chart, the cheapest round trip between LA and London would cost you 60,000 miles, and look where we’re now (at the time of writing, that is)! 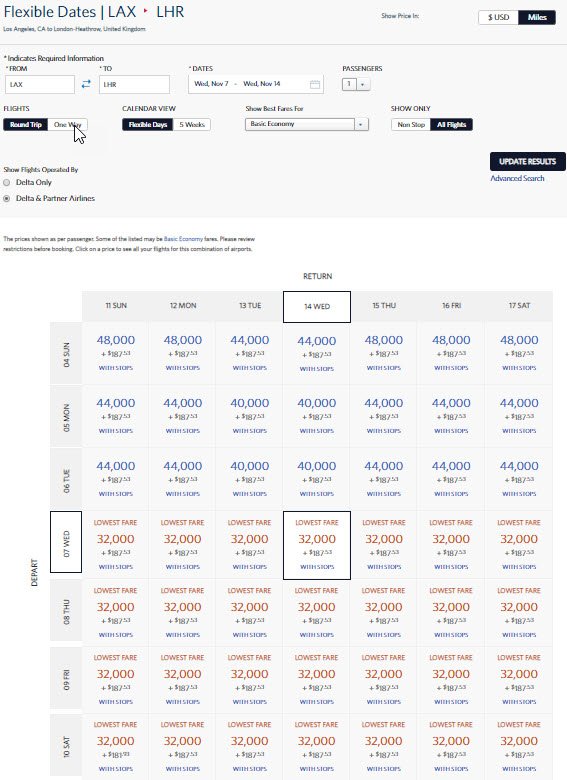 Again, this is just one example. If you are even a little bit flexible, you will find more deep discounts to destinations that have nothing to do with the latest Delta SkyMiles deal. Delta says:

Check back every week for new routes—we’re constantly adding more deals so there’s always somewhere new to explore with your miles.

But it’s not just about what they add. It seems that these “sales,” or “deals,” at least some of them, remain in effect for quite a long time. Which brings us to the 5th core principle.

5. Delta SkyMiles deals might be something more than just sales

I’ve already talked about it, but I don’t mind saying it again. In my opinion, Delta SkyMiles flash and special deals and sales aren’t really flash, special, or even sales.

Which is why every time I receive an email from Delta about its new “sale” I check my previous findings to see if anything has changed. In many cases it hasn’t.

For example, you can find many dates with the prices posted below (per round trip).

Delta rarely discounts Iceland, which is why this is a terrific deal!

When I’m looking for a coach flight, I always check Delta first nowadays, And that brings us to the 6th core principle.

6. Delta SkyMiles deals are mostly good ONLY for a) ROUND TRIPS and b) IN ECONOMY

Here is a roundtrip flight award space between Indianapolis and Paris. At 46,000 miles it’s not as good as 38,000 miles you’d pay if you traveled from Boston or New York on certain days, but it’s still better than normal “saver” awards on American or United for 60,000 miles. 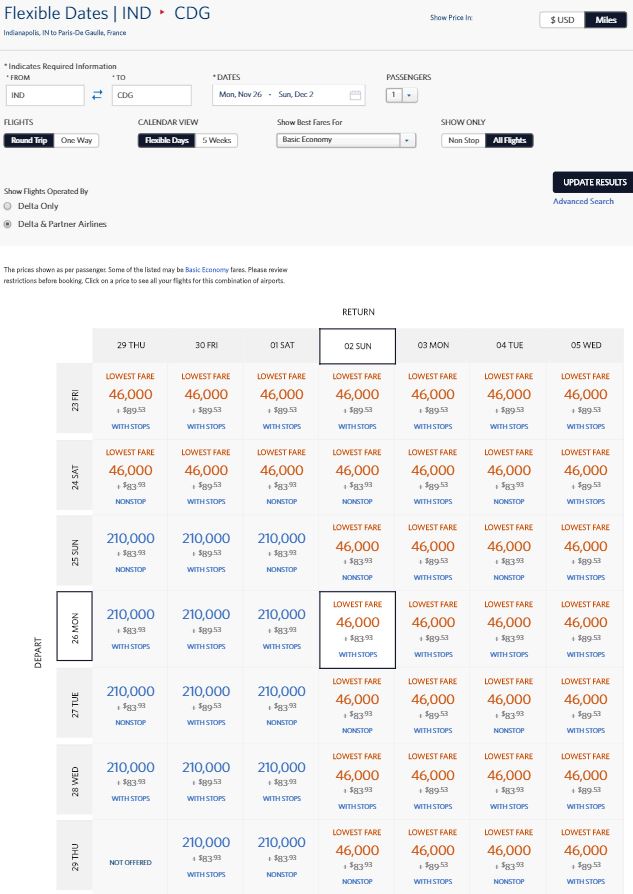 But look what happens when you choose a one-way search. 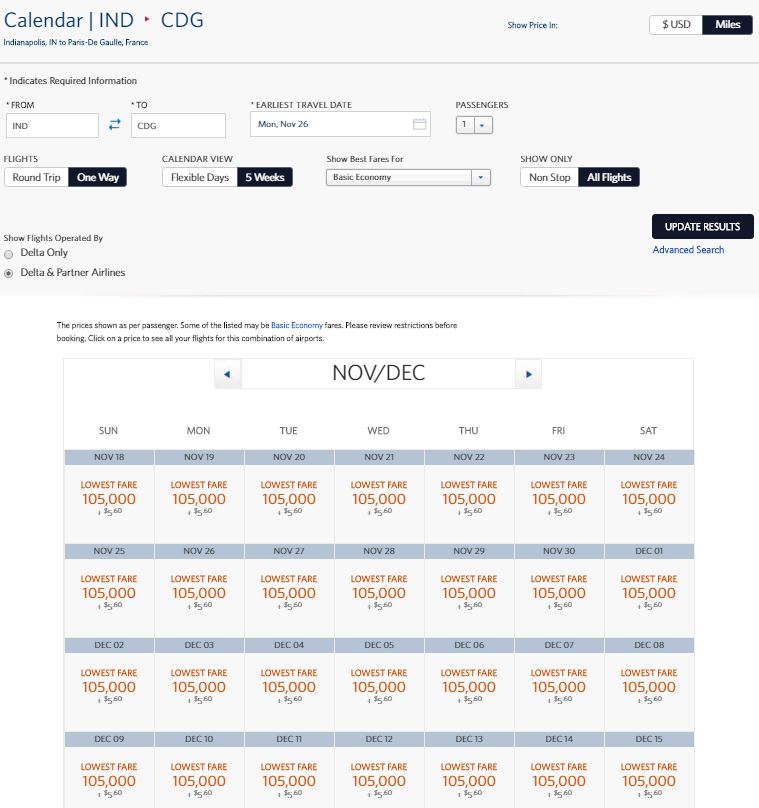 7. This Is How to Search for SkyMiles “Deals” on Delta

For most airlines, I recommend searching for outbound and inbound journey separately. It’s different with Delta. You must search by round trips to get the best value. This is what I recommend if you’re flexible.

2. Alternatively, you can search by “Flexible Dates,” but the downside is that your mileage may vary – literally! Delta might charge you differently depending on the length of your trip. On the other hand, you can quickly find the dates with the lowest mileage, and the calendar shows you nonstop and connecting flights. I often alternate between these 2 search methods to get a general idea of where the floor is. 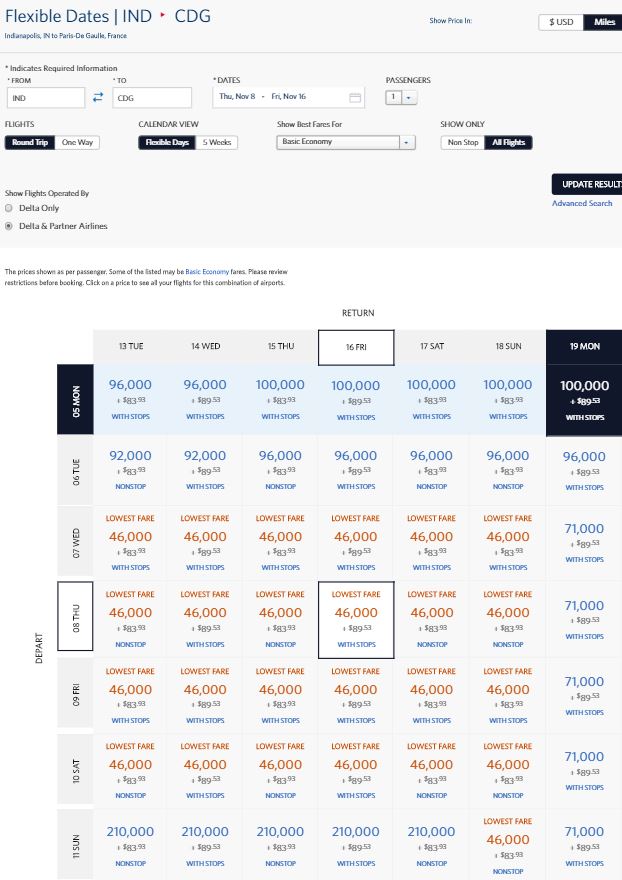 It seems to me that the best deals are out of NYC or other Delta hubs. Living in a non Delta hub, I find Delta award “deals” pretty much non existent. And the lowest priced awards require long connections or other inconveniences which destroy the value.

Andy, knocking it out of the park with this Delta post. Now, I understand why when I search one way Business Class the cost in miles blew me away and not in a good way.
Ok, so I can do economy —I think 🤔…
Excellent Job again, which is why you are a MUST read for those of us in this Game!!!

Great post, thank you. I was on Delta award redemption spree yesterday, picked up a few 37,000 r/t award tickets to Europe out of JFK, for next spring. I was a bit surprised that they had so many dates under 40k r/t to Europe, tickets were around $750/person, so in mind that was a great redemption for a coach seat.

Hey Pedro! Thanks, glad it worked out for you.

If you can plan 10-11 months out and are flexible on dates (using the 5 week calendar) it’s also possible to get a good deal on Business to Europe on Delta. I booked from my local FL airport MLB via ATL to LHR (ATL/LHR on Virgin Upper) and then return on Delta One from FCO via ATL to MLB. 160K Sky Miles plus about $75 in fees/taxes each. The domestic leg is F even though it’s a very short flight so that honestly wouldn’t matter. Big thing on this is the lie flats across the pond and the increased baggage… Read more »

1. Did you search each segment (leg) separately and did each show 80K?
2. Did you book it as multi-city? I would presume so, because you’d get hit with YQ on the way back.

Would appreciate a little more details and thanks for your comment!