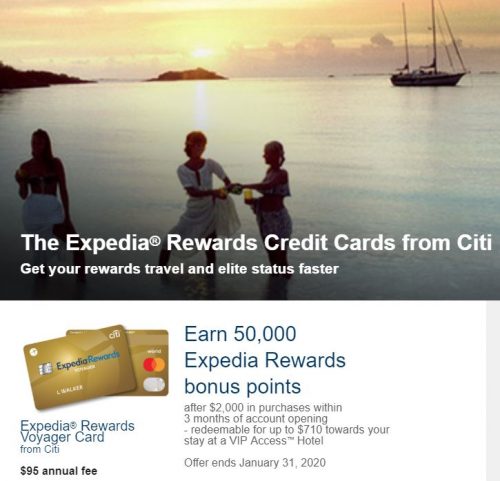 Direct Link to the Offer

I don’t like Expedia. They burned me a couple of years ago, and I haven’t booked with them ever since. Booking.com and Hotels.com have gotten all of my OTA business — although Hotels.com and Expedia.com have the same owner, so …

Having said that, Expedia has come out with a new opportunity that works equally well whether you like it or hate it. The new 50,000-point Expedia Rewards Credit Card’s offer is a truly great deal, despite the annual fee, and I’m going to explain why.

Let’s go over the most notable features.

In other words, 10,000 Expedia points buy you a ~$70 credit toward the purchase of your choice.

So with Expedia’s rewards structure you would normally get only $350 from your 50,000-point bonus if you redeem your points on flights, car rentals, or most hotels or vacation rentals. I normally don’t bother with a credit card bonus unless it can land me at least $400 in cash. So this wouldn’t seem like a great value proposition, especially considering the $95 annual fee.

This is where the VIP Access hotels come in

If you redeem your points at VIP Access hotels, they go twice as far. Redeeming 100 points will get you a $1.40 credit, so 10,000 points can buy you a $140 hotel room. We might be not in an awesome category yet, but this ratio is more than respectable. Well, it’s actually slightly more because the whole 50,000-point bonus gets you a $710 credit.

But I know what you’re thinking. “VIP Access” – that doesn’t sound cheap. It’s likely a network of super-duper expensive hotels, and my 50,000-point bonus won’t take me too far, right?

Well, that’s what I was thinking. And I was wrong. In fact, I’ve found plenty of cheap hotels in the VIP Access hotels list and plenty of expensive ones that aren’t on the list. Go figure!

Timmy and I are going to Brazil in the winter. Although there are more hotels in Rio today than there were just a few years ago, it still isn’t known for an abundance of hotels in desirable neighborhoods, and for the best price/value ratio we’ve always stayed at vacation rentals.

So I decided to check if there are any VIP Access hotels that would fit the bill, and, what do you know, I found plenty! 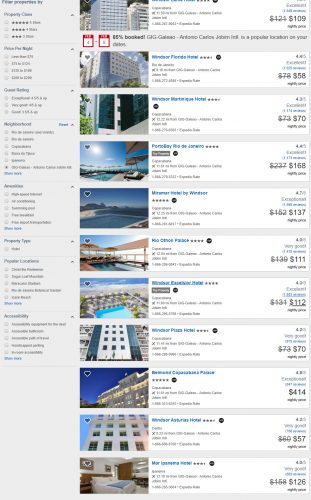 As you can see there are plenty of VIP Access hotels at different price points from budget to luxury. If you’re not hell-bent on staying at a particular hotel, you won’t have an issue putting a roof over your head.

I wish Expedia made finding VIP Access hotels easier, but they have decided against it. 🙂 However, if you follow this link you’ll bypass the cumbersome search process that makes you wish you’d never have heard of Expedia in the first place.

When you use this link, the VIP Access hotels come on top. However, while this link makes the search easier, the problem is you don’t seem to be able to tweak it. In touristy places, there can be dozens and dozens of VIP Access hotels and when you try to search by a particular criterion (property class, price, neighborhood, etc.), the search goes astray. 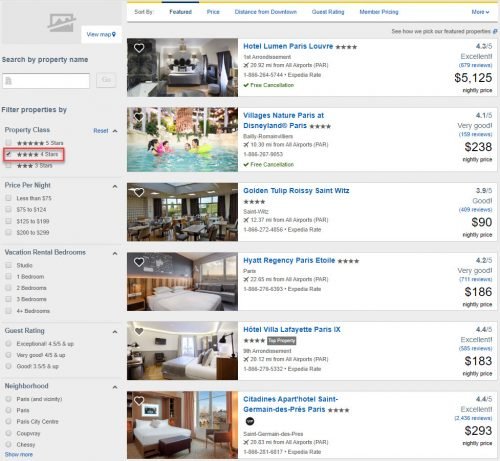 So, suck it up and search VIP Access hotels as is, without adding any search criteria, until you find what you need.

You’ll be better off in cities with tons of Expedia VIP Access hotels: Paris, Rome, London, etc., than in locales with just a few of them. Depending on when you go, Paris can have dozens of VIP Access hotels, while St. Maarten has 3. 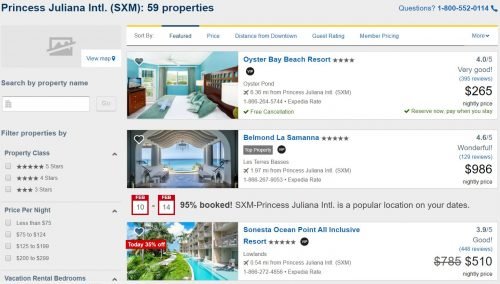 There are only 3 Expedia VIP Access hotels in St. Maarten

The Expedia Rewards Voyager card comes with the Gold status right out of the box. It’s the highest Expedia status and it looks very promising, on paper at least.

Expedia Rewards Silver and Gold members get even more:

Special amenities and services at select hotels, for example:

Gold members may get free room upgrades that include:

Of course, the problem areas here are select and may. Expedia doesn’t publish the list of benefits for each hotel and doesn’t guarantee any amenities at all, so you’re basically at the mercy of the property you’re staying at. I haven’t found many accounts on the web about how Gold members are treated at Expedia VIP Access hotels, but instead found this Reddit thread for hospitality employees. Some quotes from that thread make me feel skeptical, and I think I noticed some disdain toward Expedia from hotel employees. I wonder why. Oh, and why would they call us hotel elites “Snowflake Tier members”? 🙂 Read this thread, it’s really funny.

First time I’ve ever had somebody try and pull that one. Guest wanted a complimentary upgrade because he was an Expedia gold member. I would value a competitor’s honors program over Expedia.

According to their website, you get bonus Expedia points, a special reservation line, and comp. room upgrades at 3500 participating hotels. I can think of problems with each of these. Primarily because it’s Expedia.

And I betcha Expedia never lets the guests really know which hotels honor the free upgrade, when (as we sometimes are too busy), and other stipulations.

I shamelessly point out we’re locked out and hate Expedia for being troublesome. Management doesn’t care too much since Expedia reservations can’t receive our quality surveys.

Of course, it’s unlikely that those remarks come from the Expedia VIP Access hotels employees, so it might be not that bad. Still, treat the Gold status benefits that come with the program as the icing rather than the cake.

It’s tempting to see this credit as canceling the annual fee, but I personally don’t. You probably have the TSA Pre ✓ credit with other credit cards; and other eligible charges are for “airline incidentals, such as checked bags, in-flight entertainment or refreshments, and in-flight Wi-Fi carriers.” I’ve read that some folks have redeemed the credit on airline gift cards, but YMMV. Here are more restrictions:

Note that the $100 credit is per calendar year. If you want to try and double-dip – now would probably be a good time. 🙂

Can you transfer Expedia points?

The new Expedia Voyager’s 50,000-point offer is really among the best credit cards offers if you’re not hell-bent on staying at a particular hotel or if you’re not loyal to a specific chain. It gives you up to a $710 credit to stay at VIP Access hotels, which include all kinds of properties at different price ranges, from 3 stars to luxury. There are over 3,500 Expedia VIP Access hotels all over the world, so finding one shouldn’t be hard at all, especially in touristy places.

In addition, you’re also getting a $100 air credit, and if you value it at least at 50% of the face value as I do, it considerably offsets the $95 annual fee. Basically, the Expedia Voyager card’s bonus can get you an easy $650 + in travel money all things considered, and it’s worth mentioning that most of us would be well qualified for the card.

Have you used Expedia credit cards and/or VIP Access hotels? If so, what did you like or dislike about it?

Hi Andy! How do you redeem Expedia points? Is it kind of gift card attached to your account similar to Amazon gift card, so you use it for prepaid hotel rates and instead of paying with credit card it decreases your Expedia gift card balance?Thank you