Part 1: Get Delta One Suite to Europe for 39,000 MR Points With the 30% American Express Transfer Bonus to Virgin Atlantic 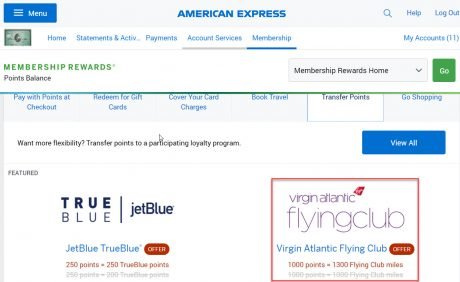 8.1.18 This is a major and comprehensive update of my old post from November 2017 due to the new American Express Transfer Bonus. I’ve also added new searches and checked availability for major routes.

Multiple blogs and forums have emphasized, and rightly so, the great value of Virgin Atlantic redemptions on ANA First Class to Japan. We’ll talk about ANA later, but I also want to point out great VS values that you can use on other airlines.

This “miniseries” will consist of 3 parts. The first part is about taking advantage of the American Express transfer bonus on Delta. Trust me, after you’re done, you will ask yourself why you haven’t paid enough attention to the Virgin Atlantic program before.

But enough talking points (pun intended). We all know that a picture is worth a thousand words, and I’ve got more than one for you.

Here is the Virgin Atlantic Chart for Delta. Check how much these flights will cost you with the 30% bonus. 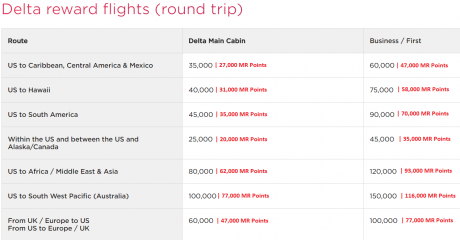 Basically, a Business Class seat to Europe would cost you 77,000 MR points per round trip; to South America — 70,000 points, and to Australia (if you can find it) — 116,000 points. Huge bargains considering that Delta’s own round-trip flight to Europe will set you back 140,000 SkyMiles.

How to search Virgin Atlantic

The Virgin Atlantic website is buggy. Try putting in the airport codes in the search fields, and you might come up with nothing.

It’s not that the search engine doesn’t recognize the airport of Los Angeles (and no, it won’t help if you write the name of the airport instead of the code) because in the next example it does recognize LAX, but not JFK.

When the engine doesn’t see an airport, click on the “eye.” The next screen will give you more options to find your city. 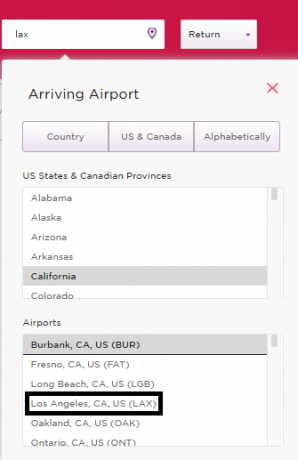 There are other bugs, too. You will find the “Pay with miles” button being grayed out when the website doesn’t like your destination choice (which is anything except London). 🙂 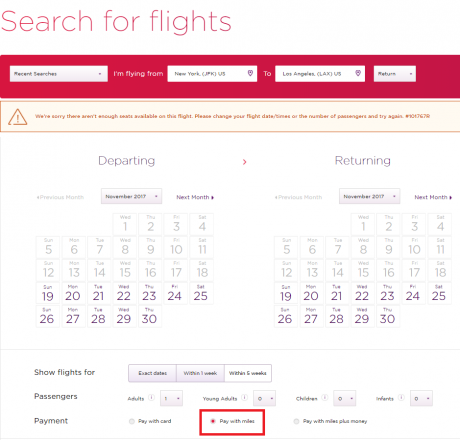 Back when I was writing the original post, all I had to do was just refresh the screen or go back and forth in my browser, but when I tried the same tricks today, it didn’t work. Luckily, I found the solution at Live And Let’s Fly. When the Virgin Atlantic site grays out “Pay with miles,” enter LHR as a destination airport. When you get the result, just click Refine search, and you can put in any city from the Virgin Atlantic list.

Keep in mind that Virgin Atlantic’s website doesn’t list all airports. For example, there are no Rome, no Berlin, and no South American cities, to mention just a few. When you can’t find your destination, you’ll have to call.

You can fly between New York and Los Angeles/San Francisco in Delta One for 35,000 Amex points per round trip or 17,500 Amex points one way with the 30% American Express transfer bonus. Impossible, you say? You’re right. I wasn’t able to find a single nonstop award until the end of the schedule.

However, not everything is so bleak.

Remember not to use Virgin miles to fly anywhere in the UK — or you will get hit with hundreds of dollars in YQ (fuel surcharge).

People say that Paris is always a good idea. Maybe, but maybe not in winter. And even then finding award space to Paris is tough; tougher than last year, especially from New York. This is early spring. 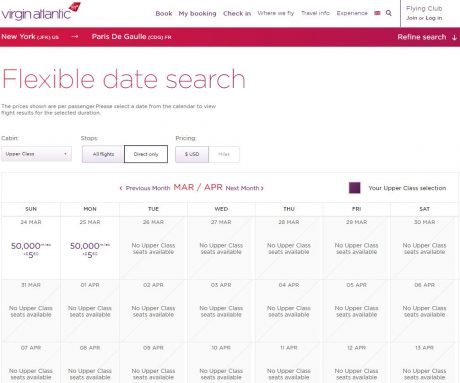 New York to Paris: only 2 dates are available at the end of March

But I checked award space to Milan, and it looks pretty decent. Dublin — even better! 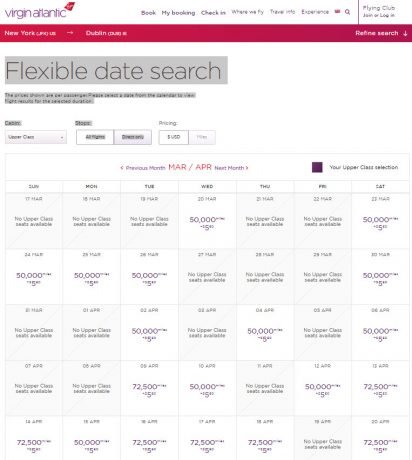 There is good Delta One award space to Dublin

When you see 72,500 miles, that’s a connecting flight via Boston. By the way, nonstop availability to Dublin from Boston is even better than from New York.

The important thing to remember is that Virgin Atlantic counts every segment (not unlike British). So, while this is a great deal, it’s a great deal for a direct route only. Remember that a direct route doesn’t mean nonstop, as I’ll demonstrate later.

So what about Delta One Suite?

Delta One suites are currently available on the A350s for the following routes:

According to Delta, they will also become available on the retrofitted 777 in the near future.

Delta One Suites are hard to find on award tickets, but not impossible. If you want to visit Amsterdam on a New Year’s Eve (not a bad idea, IMHO), you can fly there in a Delta One Suite. 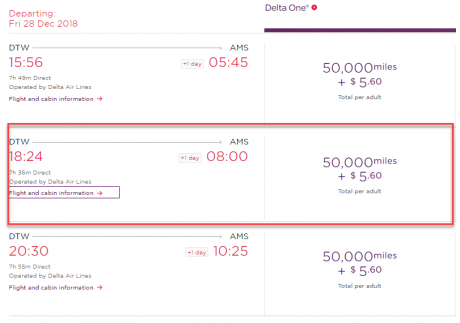 Your desired flight (Delta One Suite) leaves DTW at 6:24 PM

As you can see, there are 3 flights daily between Detroit and Amsterdam, but you need to make sure you’re flying on A350 (DL 134), otherwise (oh, the humanity!) you’ll find yourself in a regular lie-flat seat on an A330. 🙂 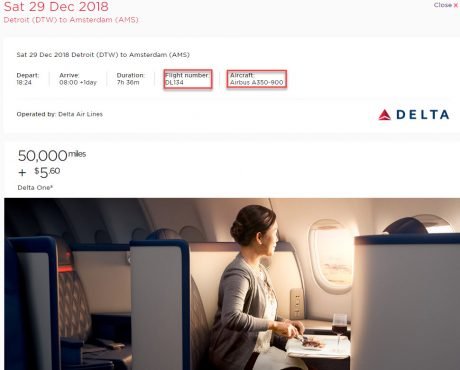 Here is another Delta One Suite option: between Seattle and Tokyo. 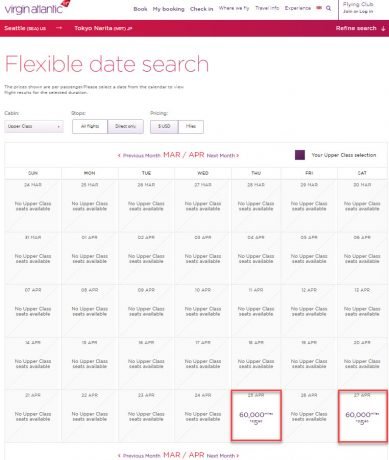 Award Space between Seattle and Tokyo is not great, but it can work if you’re flexible

When I click on either of these dates, it won’t give me the aircraft information, but, according to Delta, by April you should be flying in a suite. That is if there are no installation delays or equipment changes, otherwise, once again, you’ll have to rough it in a regular Delta One seat. Tough, I know. 🙂

If you want a sure deal for Delta One Suite (and if you’ve always dreamed to visit China), fly between Detroit and Beijing. This route has an abundance of Delta One Suite award space. 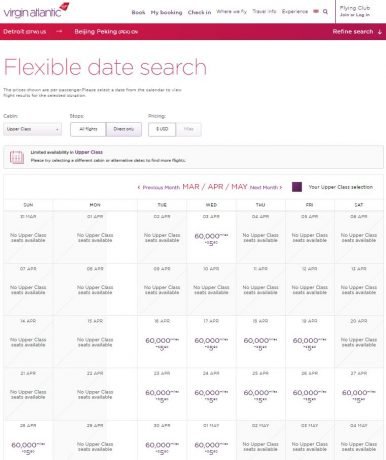 If you’d rather fly to Japan than China, self-connect to Minneapolis if you’re not lucky enough to already live there. Delta will start flying the Suite in November on a retrofitted 777-200ER. And the award space to Tokyo (HND) throughout the year is amazing! 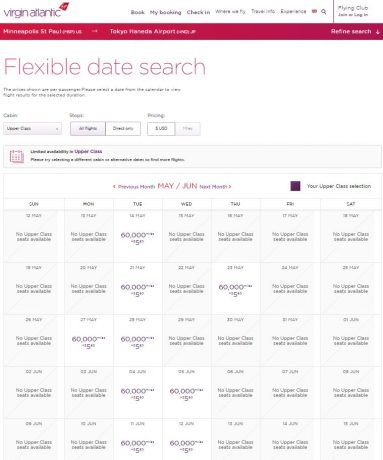 Fly from MSP to HND in Delta One Suite for 47,000 AMEX MR points

Delta flies from the U.S. to Hong Kong, China, Japan, and Korea, and from Tokyo to the Philippines and Singapore.

Note: I haven’t updated this part, because it’s still current.

Delta operates a fifth freedom flight between Singapore and Tokyo on the way to or from Seattle, and you’ll only pay 27,000 Amex points in business with the 30% American Express transfer bonus for this 7.5-hour flight. That flight is about as long as from the Northeast to Western Europe. 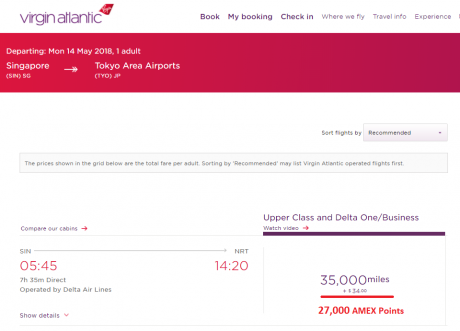 And because SIN-NRT-SEA is considered a direct flight (even though they sometimes change planes in Narita), the whole award will still cost you 60,000 SkyMiles, or 47,000 AMEX points with the 30% American Express transfer bonus. 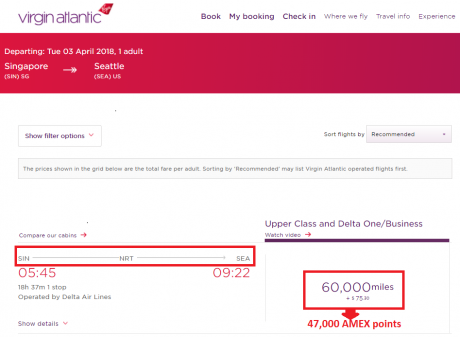 Delta One to South America 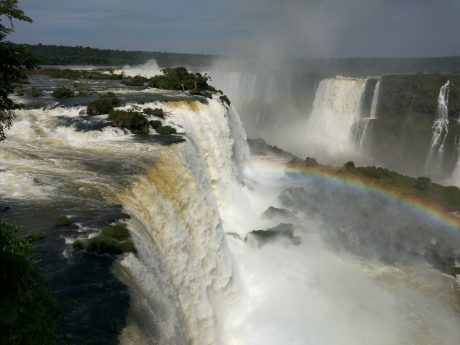 The rainbows of the Iguassu Falls, Brazil

The Virgin Atlantic website doesn’t list any South America destinations, so you must use other sources to find Delta One award space and then call Virgin Atlantic to book. Delta flies to Buenos Aires, Rio de Janeiro, São Paulo, and Santiago (also to Peru and Colombia, but for northern South America you can find good values elsewhere).

Remember that Delta’s own website will not be a good indicator of availability. You need to check a partner’s site to get a better chance of finding award space (I suggest Flying Blue / Air France). You’ll pay 70,000 AMEX points for round trip or 35,000 AMEX points for one-way travel with the 30% American Express transfer bonus.

Getting a Delta One Suite on an award ticket is not always easy, but quite possible with some flexibility. For best results, consider a positioning flight to Detroit or Minneapolis.

For Delta long-haul Business class, you’re almost always better off booking Delta with Virgin Atlantic Flying Club miles (except for the UK flights, due to high fuel surcharges). With the 30% American Express transfer bonus, the savings become quite pronounced.

Filed Under: Credit Cards, Miles and Points
← The Chase Ritz Carlton Card Is DEAD, Sweet Citi Prestige Retention Offer, My Other Credit Card Musings, and How to Lose a Bunch of Your Email Subscribers in One Day
PART 6: Marriott Cheap Category Hotels in Spain →
0 0 votes
Article Rating
Subscribe
Login

Nice work! I almost wish I could be at my computer, booking a ticket, instead of on a beach on an island in the Adriatic. As you wrote…”tough life, I know”. Hopefully, the titans won’t rip off your idea and it’ll still be around for me when I get back home!